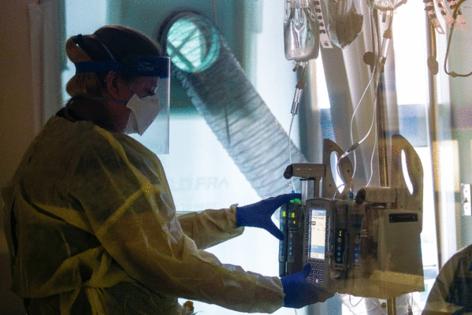 Infants younger than 6 months had the same rate of hospitalization as seniors age 65 to 74 during this summer’s omicron wave, according to a new report.

The findings, published by the U.S. Centers for Disease Control and Prevention, show that COVID-19 can still cause severe and fatal outcomes in children too young to be vaccinated.

“These findings underscore the continued risk for COVID-19–associated hospitalization among infants [younger than] six months who are ineligible for vaccination,” the report said.

“Multiple factors likely contributed to high COVID-19–associated hospitalization rates among young infants during the omicron variant–predominant period,” the authors explained, “including the high infectivity and community transmission of the SARS-CoV-2 omicron variant and the relatively low threshold for hospitalizing infants for signs and symptoms consistent with COVID-19 (e.g., fever) relative to that in older children.”

In prior surges, the youngest infants were hospitalized at rates well below those among seniors age 65 to 74.

The COVID-19 hospitalization rate for the youngest infants during the summer’s omicron wave was significantly higher than the previous summer’s peak, which was dominated by the delta variant.

The findings may come as a surprise, especially given the conventional wisdom that younger children and infants are far less likely to fall seriously ill with COVID-19 than older groups.

But the data illustrate that the groups hit hard by the virus can change with the rise and fall of new coronavirus variants.

The CDC and American College of Obstetricians and Gynecologists recommend that pregnant and breastfeeding women be vaccinated “to facilitate the passive transfer of antibodies to these very young infants,” Dr. Krysia Lindan, a UC San Francisco professor of epidemiology and biostatistics, said at a recent campus town hall.

Retirement is a phase of later adulthood that remains the ultimate goal for many professionals who dream of leaving the daily grind behind. But is retirement right for everyone? How do you know if retiring is the best ...Read More