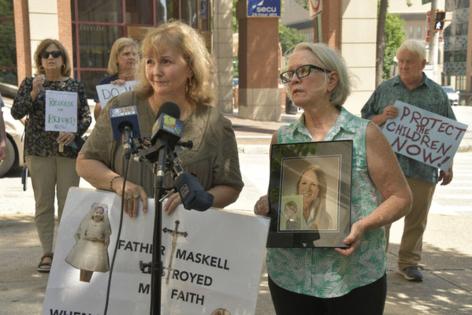 BALTIMORE — Abuse survivors who were featured in “The Keepers,” a widely viewed 2017 Netflix documentary about clergy sexual misconduct at a Baltimore Catholic girls’ school in the 1960s and ’70s, have filed a court motion calling for the full release of a report by the Maryland attorney general on sexual abuse by clergy and other employees in the Roman Catholic Archdiocese of Baltimore.

Teresa Lancaster and Jean Wehner, who were extensively interviewed in the seven-part series, joined with a third woman who has not yet agreed to identify herself publicly, to file the motion Wednesday in Baltimore Circuit Court.

The women decided Tuesday to file the document after learning from a Baltimore Sun story that the archdiocese is helping pay legal fees for members of a group of unidentified individuals that’s seeking to seal court proceedings surrounding a judge’s decision on whether to release the report. The group is comprised of people who are named in the report but who are not accused of abuse, according to a court filing.

An attorney for the group, William J. Murphy, declined to comment further about his clients’ identities or motives.

In an interview Wednesday with The Sun, Lancaster said “light needs to be shined on the conspiracy” to cover up sex abuse in the archdiocese. She said releasing the report with the names of everyone identified by the attorney general’s office would also bolster arguments for making changes to Maryland’s laws regarding the statute of limitations in lawsuits.

While the archdiocese has repeatedly said it supports the document’s release, it also has questioned its accuracy without providing specifics. It has also said it supports the rights of people named in the report but not accused of abuse to participate in the legal process.

Democratic Attorney General Brian Frosh spearheaded the effort to investigate and document incidents of abuse by priests and other employees of the archdiocese over the past eight decades.

Frosh’s office, which worked on the investigation for four years, completed the 456-page document this month. It filed Nov. 17 a motion with the court seeking to make its contents public. The court’s permission is required because the report includes materials obtained through a grand jury subpoena, which must otherwise remain secret under Maryland law.

Lancaster, an attorney who lives in Edgewater, said it angered her to learn that the archdiocese is paying the fees for people seeking to remain anonymous when it’s also saying it wants transparency.

“To me, it’s just an outright lie for them to say they support the release,” she said. “I’ve been getting upsetting messages from all kinds of people who are floored that they would do this. I just tell them that I’ve been trying to get transparency and accountability from the Catholic Church for decades now, so, unfortunately, I have to tell them that this doesn’t surprise me a bit.”

BALTIMORE — After saying it would not oppose the release of a report detailing decades of sexual abuse in the Catholic Church in Maryland, the Archdiocese of Baltimore is helping to pay lawyers for an anonymous group ...Read More