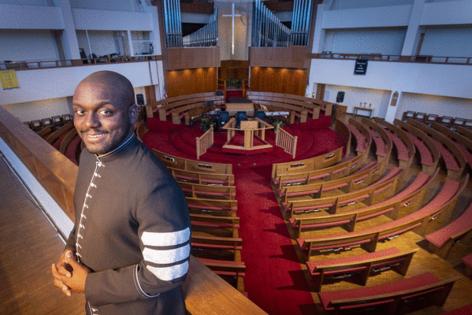 But Harrison, now 32, and in his fourth year as Zion’s senior pastor, has shown no fear about taking a position once held by the late Rev. Leon H. Sullivan, a civil rights and human rights giant.

Asked if he ever felt overwhelmed about leading the historic North Philadelphia church, at 3601 N. Broad St., Harrison didn’t miss a beat when he answered: “I started preaching when I was 16 years old. God called me when I was 12. I see the magnitude of Rev. Sullivan and the impact he had on the city and throughout the world.

“Some men come in and think they’ve got to be the next Rev. Sullivan, but I’ve always been confident in who I am and who God wants me to be.

“I tell my congregation: ‘No one can add to or subtract from Pastor Sullivan. The wise person will build upon that legacy. … If you build on what is already a strong, structural foundation, the sky is the limit,’” he added.

Harrison was just a year out of Yale Divinity School when he arrived at Zion to give that first guest sermon.

He was equipped with both experience — he began preaching as a teen in Chicago, his hometown — and a master’s degree in divinity from Yale.

Two years later, after he had worked as a youth pastor and a community organizer in Chicago, Zion hired Harrison, then 28, as only its 12th senior pastor in the church’s 140-year history. The church was founded in 1882.

Two weeks after he was chosen to lead Zion in February 2018, he was accepted into a doctoral program at Duke Divinity School. And he was officially installed as pastor later that year, on July 1.