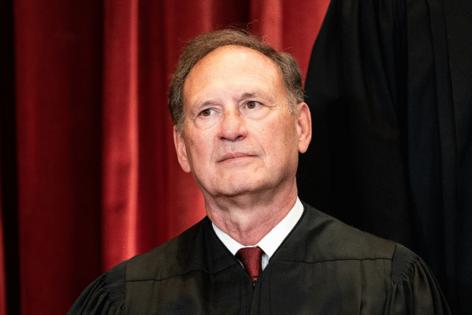 WASHINGTON — U.S. Supreme Court Justice Samuel Alito decried what he called “hostility to religion” in his country and Europe, as he made his first public remarks since the release of his opinion overturning the constitutional right to abortion.

Speaking in Rome at a religious-liberty summit sponsored by Notre Dame Law School, Alito said the decline of faith in the Western world had left believers vulnerable to discrimination.

“The problem that looms is not just indifference to religion, it’s not just ignorance about religion,” he said. “There’s also growing hostility to religion, or at least the traditional religious beliefs that are contrary to the new moral code that is ascendant in some sectors.”

The remarks, delivered July 21 but made public Thursday on the school’s website, followed a pair of Supreme Court decisions last month bolstering religious rights. With Alito in the majority, the court gave public school teachers and other staff more freedom to pray in public spaces and beefed up the rights of parents to use taxpayer funds for religious education.

Alito, a Roman Catholic, has been perhaps the court’s most ardent advocate of religious rights, at times casting believers as aggrieved for abiding by their faith. He said in his latest remarks that Christians had been persecuted for centuries, including in Rome’s Colosseum, where “who knows how many” were “torn apart by wild beasts.”

He mentioned his abortion opinion only in passing during the 35-minute speech, pointing to criticism the decision had received from foreign leaders, including outgoing U.K. Prime Minister Boris Johnson.

“I had the honor this term of writing I think the only Supreme Court decision in the history of that institution that has been lambasted by a whole string of foreign leaders who felt perfectly fine commenting on American law,” Alito said.

“One of these was former Prime Minister Boris Johnson, but he paid the price,” he quipped, drawing laughter from the audience.

Johnson, who announced his resignation July 7 amid a succession of scandals, had called the Supreme Court ruling a “big step backwards.”

Alito, sporting a beard he doesn’t have when the justices are on the bench, said religious liberty “promotes domestic tranquility.” He argued that advocates need to make the case for preserving protections against discrimination.

“Unless the people can be convinced that robust religious liberty is worth protecting, it will not endure,” he said.