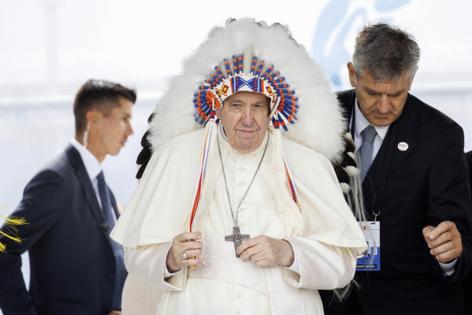 In this era of reflexive counterpunching, where powerful people and institutions are often conditioned not to back down, public apologies are rare. When they do come, they are often begrudging statements designed to silence critics, not soul-searching, heartfelt acknowledgments of wrongdoing.

That makes it refreshing to see Pope Francis — leader of a religion with well more than a billion adherents and an array of influential institutions — express deep regret about the church’s role in the horrific system of Canadian residential schools. Over many years, these often church-affiliated institutions endeavored to wipe out entire cultures by receiving children taken from indigenous families and attempting to coercively assimilate them, often inflicting all manner of harm and abuse, up to and including death.

Having traveled to Maskwacis, Alberta, to speak to indigenous communities on their own land, the pontiff avoided the many rhetorical tricks of the modern non-apology, saying instead he had come to “humbly beg forgiveness” for what he strikingly called the “evil committed by so many Christians.” He is right to do so, and he is right that forgiveness alone is not enough.

Francis also called for “concrete ways” in which survivors and their families could be assisted. Both the apparatus of the church and the governments that directed the abuse should take heed. Nothing will turn back the clock, but all must take active steps to tell the full story, hold culprits accountable and make scarred families whole, to the extent that is still possible.