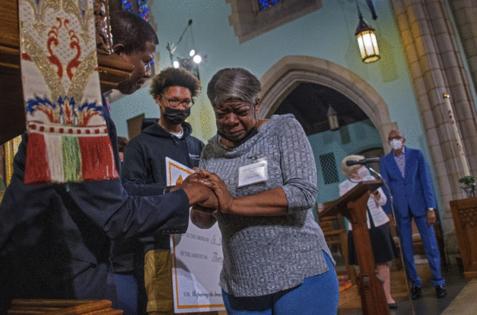 About 120 bishops and more than 1,200 clergy and parishioners will converge Friday on the Baltimore Convention Center for the 80th iteration of the general convention of the Episcopal Church in the United States, the biggest and most important regular gathering of the mainline Protestant denomination. The session will last four days.

Attendees will use the event — as their predecessors have nearly every three years since 1785 — to socialize, worship as a group, and chart the denomination’s course for the coming few years.

Divided into the House of Bishops and the House of Deputies — they’ll vote on a budget through 2024 and elect several officers; consider resolutions clarifying church positions on matters such as abortion rights; and address a range of liturgical questions, such as whether church law should be changed to allow people who aren’t baptized to receive Communion and how to alter a Good Friday reading that suggests Jesus’ crucifixion came at the insistence of “the Jews.”

According to the church’s top official, though, the most important issues discussed will be racial injustice and racial reconciliation: how and why racial discrimination took root in the nation and the church, what harm it has caused, and how Episcopalians can “repair the breach” to which it gave rise. And, he said, the actions of the Diocese of Maryland on the issue played a role in the city hosting the gathering.

The Most Rev. Michael Curry, once a priest in West Baltimore, is the church’s first African American presiding bishop and 27th bishop overall. He said in an interview with The Baltimore Sun that fundamental tenets of the Christian faith call the denomination to take such actions, no matter how many mistakes it has committed over the centuries.

“Our prayer books say, ‘We have erred and strayed from thy ways like lost sheep,’ and we certainly have,’” Curry said. “The point of acknowledging that is not to wallow in it, but to face our sins and mistakes, then turn together and join hands toward building a new future. That includes connecting across our racial differences and our variety and our diversity without repeating the same old mistakes.”

Curry, 69, served as rector of St. James Episcopal Church in West Baltimore from 1988 to 2000. He was elected at the 2015 general convention to serve a nine-year term as presiding bishop.

The Episcopal Church, a member church of the worldwide Anglican Communion, has about 1.8 million baptized followers in 22 countries and territories, the overwhelming majority of them in the U.S. Its leadership has moved the denomination in an increasingly progressive direction in recent years, confirming the church’s first openly gay bishop in 2003 and approving same-sex marriage in 2015.

The changes have occurred at the same time as a decline in membership — the church claimed more than 3 million members as recently as the 1960s — though reports showed an increase in total donations and pledges in the three years leading up to the coronavirus pandemic.

Catholics make up the biggest religious group in Northern Ireland for the first time since the state was formed a little over a century ago, a trend that will likely add fire to a debate over the region’s future in the ...Read More