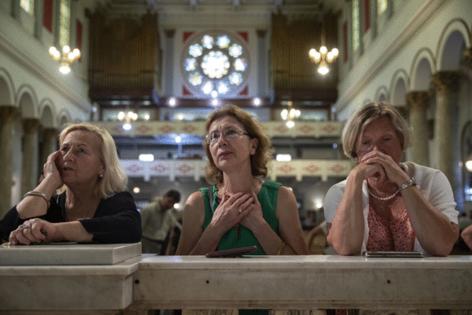 Only 20% of people in the U.S. now say they view the Bible as the literal word of God — a record low — while a record-high of 29% of Americans agree the Bible is only a collection of “fables, legends, history and moral precepts recorded by man.” The number of Americans who take the Bible as God’s “actual word” has decreased from 24% since 2017 and is only half of what it was when that belief peaked in 1984, Gallup reported.

But 49% of respondents said the Bible is “inspired by God (but) not all to be taken literally.”

The new poll surveyed members of the United States adult population, including individuals who identify with religions other than Christianity and individuals who do not have any specific religious identity at all.

Among Christian adults surveyed, those who identify as Protestant, evangelical or born again were most likely to say the Bible is literally true. Belief in the Bible as literal was also highest among individuals who are more religious and those with less formal education.

A decreasing number of people in the U.S. — 44% — also reported saying that religion is “very important,” compared to 60% of respondents who said the same in 2002, according to Gallup.

The survey’s results follow similar trends showing a decrease in overall religiosity among adults in the U.S. A 2021 survey showed that millennials in the United States are far less likely to believe in God than older generations and instead are opting for beliefs outside of organized religion, such as horoscopes.

Another 2021 survey found that nearly three in 10 American adults see themselves as not identifying with a religion while the number of Americans identifying as Christian shrank.

“If the unaffiliated were a religion, they’d be the largest religious group in the United States,” Elizabeth Drescher, an adjunct professor of religious studies at Santa Clara University, told The Associated Press in December.

The six conservatives on the Supreme Court, who purport to revere the Constitution, have a funny way of ignoring the parts of the document that go against their conclusions. We know of no other way to rationalize their ...Read More

House Speaker Nancy Pelosi received Holy Communion Wednesday at the Vatican and met with Pope Francis despite her support for abortion rights.

The Supreme Court on Monday took a significant step toward allowing prayer back in public schools. As with a decision last week that required the state of Maine to subsidize religious schools, the court rejected any notion...Read More

For Southern Baptists across the nation, Friday was a day of triumph, rejoicing and praising God.

After 50 years of legal battles and prayer, Roe vs. Wade was overturned as the court declared a woman's right to an ...Read More