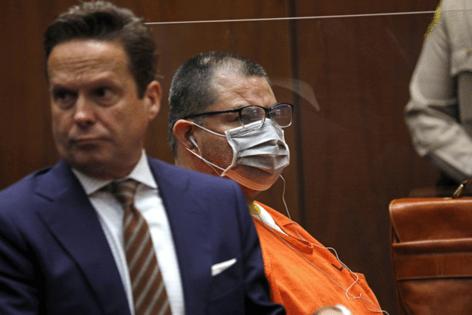 Several of Garcia’s victims testified during the lengthy hearing Wednesday, and the courtroom was filled with muffled sobs as the sentence was handed down.

“I’ve been a judge for a long time,” said Los Angeles County Superior Court Judge Ronald S. Coen, who presided over the sentencing. “I’ll never cease to be amazed at what some people do (in the name of) religion.”

Before reading the sentence, Coen apologized to the victims. Many had wanted the case to go to trial, but Garcia agreed to plead guilty Friday. Coen said: “My hands are tied. Lawyers do what lawyers do.”

“But I just want to tell the Jane Does that the world has heard you,” he said. “And for those family members that have abandoned you, shame! Shame on you!”

Turning his attention to Garcia, he said, “And as to the defendant, you are a sexual predator.”

After maintaining his innocence for three years and branding his victims liars, Garcia abruptly pleaded guilty Friday to two counts of forcible oral copulation on a minor and one count of committing a lewd act on a child.

He entered the plea three days before he was scheduled to stand trial on charges of rape, producing child pornography, conspiring to commit human trafficking and other sex crimes.

A crowd of news cameras waited at the Los Angeles courthouse’s Temple Street entrance Wednesday morning in anticipation of Garcia’s fate. The courtroom where the sentencing took place was so packed that several dozen trial watchers were shepherded to an overflow room, with audio, but no video, of the proceeding.

As the hearing started, a prosecutor said the state had intended to call a psychiatrist at trial who was going to testify that “institutional betrayal is the worst type of abuse.”