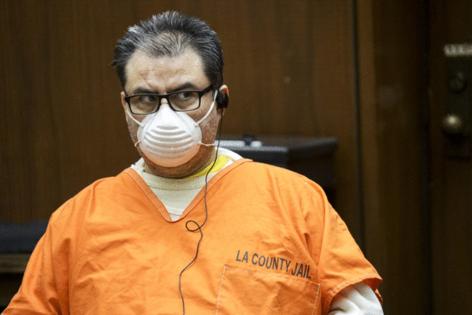 “Today’s conviction sends a clear message that sexual exploitation is never acceptable in California. We will hold you accountable if you break the law,” Attorney General Rob Bonta said in a news release Friday afternoon.

Garcia’s followers believe the 53-year-old is an “apostle” appointed by God to direct the megachurch, which has branches in 50 countries, including churches in Los Angeles.

He has been in jail for nearly three years awaiting trial, since state prosecutors charged him with abusing girls from his congregation — while alleging that the sexual misconduct was covered up for years.

García “used his power to take advantage of children,” Bonta said. “He relied on those around him to groom congregants for the purposes of sexual assault. Today’s conviction can never undo the harm, but it will help protect future generations.”

Three female church members have also been charged with various offenses. One remains on the run, while another has agreed to testify against Garcia, saying they themselves were abused.

A church member who was expected to testify, Alondra Ocampo, pleaded guilty to four counts as part of a plea deal in 2020. She will be sentenced at a later date. She was accused of grooming teenage girls for Garcia’s sexual pleasure. Her attorney previously told the Los Angeles Times that Ocampo herself suffered years of sexual abuse in the church as a minor.

Authorities have yet to locate the third woman, Azalea Rangel Melendez.

The crimes committed by Garcia occurred between 2015 and 2019. The case against him came as a result of a tip in 2018 to a U.S. Justice Department website that was created to help people report abuse by clergy.