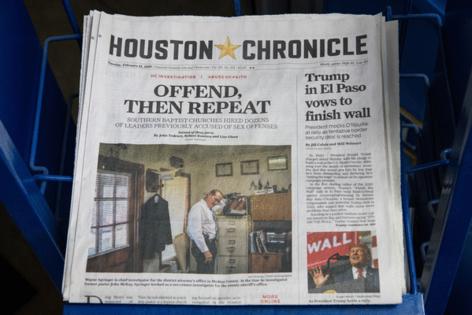 While the Catholic Church has spent much of the last three decades wrestling with deeply painful revelations of priestly sexual abuse and the bishops’ callous disregard for the people in their care, many American Protestant denominations self-righteously wagged fingers at the Catholic hierarchy for tolerating pedophile priests when they knew they had a problem.

“How can you help your brother remove the speck from his eye when you stagger along with a log in your own eyes?” Jesus asked. Those in the Southern Baptist Convention, the nation’s largest denomination, should have taken these words to heart.

A recent report, the result of a third-party investigation by Guidepost Solutions, details the stonewalling, the lying and the gaslighting of victims by the SBC’s leaders. The report indicts the denomination’s Executive Committee based on its own internal documents.

Among the report’s worst findings: Many preachers and youth workers implicated by worshipers as sexual exploiters remain employed by SBC churches. Since its churches are independent, the SBC has no enforcement mechanism to remove abusers whose congregations want to keep them.

The leadership of the denomination used that argument as an excuse to do nothing. They cynically argued that congregations must sort out who leads them. Who are they to judge?

The story gets worse. The executive committee long claimed that legally, it could not even keep records of sex-abusing pastors. The report revealed that it did have one, which included 700 cases, which the committee kept secret. The members knew they were keeping predators in active ministry.

Former Southern Baptist leader Russell Moore summed up the scandal: While reading the report, he wonders “how many children were raped, how many people were assaulted, how many screams were silenced, while we boasted that no one could reach the world for Jesus like we could? That’s more than a crisis. It’s even more than just a crime. It’s blasphemy. And anyone who cares about heaven ought to be mad as hell.”

Another word of Jesus’ the SBC’s leaders forgot, as the Catholic bishops did before them: “Whoso shall offend one of these little ones which believe in me, it were better for him that a millstone were hanged about his neck, and that he were drowned in the depth of the sea.”