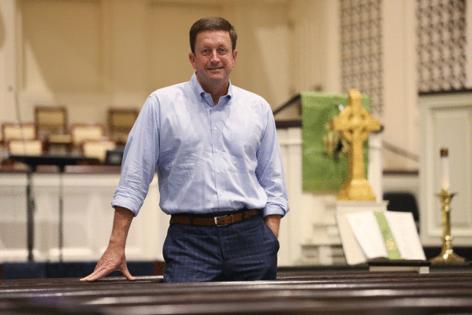 ORLANDO, Fla. -- As a crowd gathered outside City Hall in downtown Orlando to rally a day after a draft of a Supreme Court decision to overturn Roe v. Wade was leaked, Rev. Margalie Belizaire joined them to demand that the nation’s abortion rights remain intact.

The demonstrators needed to see her there, said Belizaire, minister at First Unitarian Church of Orlando.

“We can’t stay quiet when the reproductive rights of others are being infringed upon,” she said. “If there are marches, then we need to be there with our clergy vestments on. I think we need to show up wherever it is that will allow people to see that we are with you and we are in support of you.”

Belizaire, who also allowed supporters of Planned Parenthood to use her church on East Robinson Street just east of downtown Orlando as a meeting place to make signs to use at rallies, acknowledged that some might be surprised to see a church leader supporting abortion access. After all, the national anti-abortion movement has for decades been led by conservative evangelical Christians who argue that life begins at conception and, therefore, view abortion as akin to murder.

But researchers and local clergy members said views on abortion vary widely among pastors, with some believing few or no abortions are justifiable and others believing that it’s always up to a woman to choose when she is ready to become a mother. Many are somewhere in the middle — unwilling to encourage abortions but supportive of those who choose to end unexpected or unwanted pregnancies.

That range of beliefs on reproductive rights is in line both with four local religious leaders who shared their views with the Orlando Sentinel and with a study published in 2020 that interviewed 20 pastors in Georgia about their views on abortion.

“Views are complex. People are complex,” said Jessica Dozier, a doctoral candidate and researcher in the Department of Population, Family and Reproductive Health at Johns Hopkins University. “In this study, the religious leaders’ attitudes and beliefs ranged from pro-life to pro-choice with many really falling into neither distinct category.”

As the Georgia pastors formed their thoughts on abortion, few relied solely on the Bible to direct their decisions, Dozier’s study found. Instead, they used scripture as a foundation, then layered their personal experiences on top of that.

That meant the pastors Dozier interviewed emphasized “the sanctity of life” and the belief that all people are created in the image of God, which means every life is precious, but also said if someone in their congregation came to them to discuss an unplanned pregnancy, the need to be loving and supportive no matter what decision was made was equally important.

Archbishop of San Francisco Salvatore Cordileone announced Friday that Rep. Nancy Pelosi will not be admitted to receive Communion in response to her push to codify abortion rights, underscoring the nation's widening ...Read More