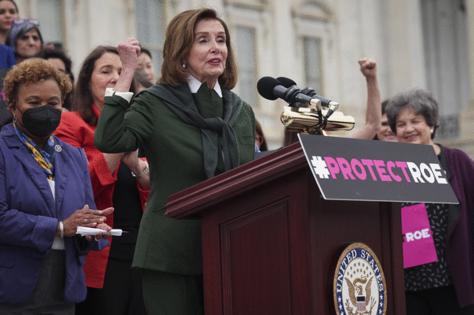 Archbishop of San Francisco Salvatore Cordileone announced Friday that Rep. Nancy Pelosi will not be admitted to receive Communion in response to her push to codify abortion rights, underscoring the nation's widening divisions as the U.S. Supreme Court consider whether to overturn Roe vs. Wade.

His statement marks the latest clash between Archbishop Salvatore Cordileone and the House Speaker over abortion rights, which Pelosi has championed.

"After numerous attempts to speak with Speaker Pelosi to help her understand the grave evil she is perpetrating, the scandal she is causing, and the danger to her own soul she is risking, I have determined that she is not to be admitted to Holy Communion," Archbishop Salvatore Cordileone said in a tweet about the San Francisco Democrat who is speaker of the House.

The move comes a year after Cordileone and Bishop Robert McElroy of San Diego became embroiled in a debate over excluding from Communion politicians who support abortion rights like Pelosi and President Joe Biden, also a Catholic.

"To those who are advocating for abortion, I would say, 'This is killing. Please stop the killing. You're in a position to do something about it,'" Cordileone said last year in an interview with Catholic television network EWTN.

Cordileone has challenged Pelosi over her abortion stance several times. In 2021, she responded by saying: "The archbishop of the city, that area, of San Francisco, and I have a disagreement about who should decide this. I believe that God has given us a free will to honor our responsibilities."

"I keep saying to people who say things like that, when you have five children in six years and one day, we can talk about what business it is of any of us to tell anyone else what to do," Pelosi added at the time, according to the San Francisco Chronicle. "For us it was a complete and total blessing, which we enjoy every day of our lives, but it's none of our business how other people choose the size and timing of their families."