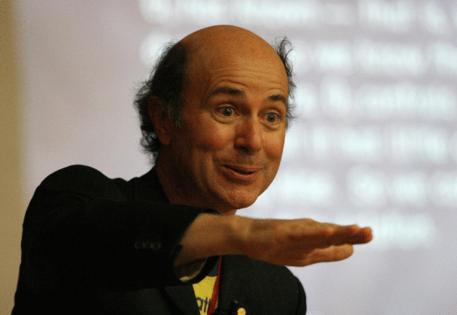 It's not just the show-stopping, full-arc-across-the-sky rainbows that catch the Nobel laureate's eye. He's equally transfixed by the array of color that shows up on soap bubbles, in sprays of water and in prisms.

"There are rainbows all over the place, once you start paying attention," he said recently from his home in Concord, Mass.

In Judaism, rainbows serve as a reminder of the covenant God made with Noah to never again destroy the Earth. There is even a special prayer to recite when one encounters them. For Wilczek, 71, rainbows are both aesthetically "pretty" and serve as an invitation to launch into a scientific reverie about what makes the phenomenon possible: how the light is refracted, what the atoms are doing, how Sir Isaac Newton discovered the nature of color.

"My everyday life has been very much enhanced by occasionally reflecting on what's going on under the hood," he said.

As a theoretical physicist, Wilczek has been peeking under the hood of our perceived reality for more than 50 years. His insights and ideas have led to several revolutionary scientific discoveries, as well as an almost theological perspective on the nature of the world and our role in it that he shares in his myriad articles, books and talks for a general audience.

"In studying how the world works, we are studying how God works, and thereby learning what God is. In that spirit we can interpret the search for knowledge as a form of worship, and our discoveries as revelations," he wrote in his most recent book, "Fundamentals: Ten Keys to Reality."

It's this articulation of the link between science and spirituality that led to Wilczek's most recent high-profile award — the Templeton Prize — one of the world's largest annual individual awards, valued at more than $1.3 million, which he received last week. The prize is given to those who use "the power of the sciences to explore the deepest questions of the universe and humankind's place and purpose within it," according to the Templeton Foundation.

Past recipients include Jane Goodall, the Dalai Lama, Desmond Tutu and St. Teresa of Kolkata.

Over the last 50 years, Wilczek's ideas and insights have touched nearly every corner of physics. He won the Nobel Prize in 2004 for his theoretical description of the strong nuclear force, now a cornerstone of the Standard Model, which posits that everything in the universe is made of a few fundamental building blocks that interact with each other by no more than four fundamental forces — the strong force, the weak force, electromagnetic force and gravitational force.