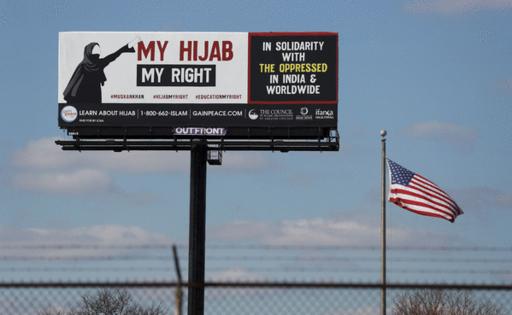 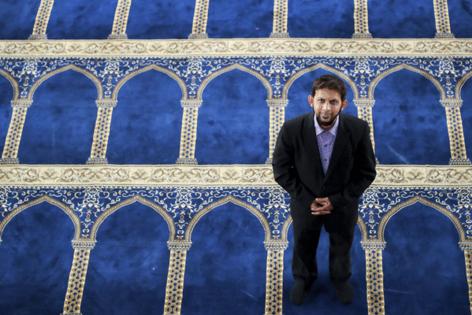 CHICAGO -- Driving north on Interstate 294, Chicago-area drivers might notice a billboard that reads “My hijab, my right” featuring an illustration of a Muslim woman with her arm raised to make a fist. The ad is part of a campaign organized by local Islamic organizations to raise awareness of the violation of the freedom of religion right of Muslims in India that has arisen in the last three months. The second goal of this campaign is to “clear negative stereotypes about the hijab and oppression.”

In the southwestern Indian state of Karnataka, young women were denied entry to school and colleges because the state put a strict policy that prohibits uniforms to be worn with hijabs, said Aamer Abdul-Jaleel, a Chicagoan and organizer of the “My hijab, my right” campaign with the local chapter of the Muslim organization GainPeace Chicago.

“The reason this billboard is relevant now is because the right to wear the hijab for the Muslim women and the rights that we take for granted in this country — freedom of expression and freedom to wear what we want — they are being taken away in many parts of India,” said Sabeel Ahmed, director of GainPeace Chicago, a group that wants to raise awareness and popularity on this issue in the U.S., via its campaign with the Council of Social Justice and the Council of Islamic Organizations of Greater Chicago.

The woman illustrated in the billboard is Muskan Khan, an Indian girl who became one of the main images of this movement as a video of her being heckled at her college by a crowd of Hindu male students went viral on social media. “Other Muslim women in India have also been victims of lynching, and once the people of our communities in Chicago heard (Khan’s) story, they understood the motive of our campaign and supported it,” Ahmed said.

“It’s been 23 years since I came to the States and none of my relatives who decided to wear a hijab in India like my mom and my aunts were never harassed,” said Samia Abdul-Jaleel, a Chicago resident and India native Muslim woman who helped with this initiative. “My relatives never experienced any racism or discrimination (for being Muslim), and it makes me sad to see how things are changing.”

GainPeace representatives explained that these measures were being taken in India because of the rise of a political party that holds the Hindu majority in the state. According to the 2011 census of India, there are 172.2 million Muslims in the country, making it one of the top three countries with the largest Muslim population.

“I see how that narrative could be out there, but it’s just not rooted in my reality,” said Shereen Husain, board member and secretary of the Council of Islamic Organizations of Greater Chicago. “(Wearing a headscarf) is something that we choose to observe just like any other tenet of faith, and it is something personal to each person.”

“Over the summer there were times that I get a lot of questions from people from other faiths like: ‘Wow, you’re wearing a full sleeve and you’re covering your hair like, aren’t you hot in this 100-degree weather?’,” Abdul-Jaleel said. “But I felt very confident and very strong, so I actually took these occasions in a positive way to teach them about my religion so they could respect it as I respect other religions.”

Some leaders in the community, however, think the message should have a clearer focus on the situation in India.

“I understand the sentiment and I agree that the Islamophobia and the attacks against particularly Muslim women students in India are very heinous, and we should all speak out against it, and we should be aware of it,” said Hind Makki, an interfaith and anti-racism educator based in Chicago. “But I felt like the billboard was not very clear about it.”

Although there is a portion of it that does talk about standing “in solidarity with the oppressed in India and worldwide,” Makki said that most Americans are still not aware of the situation in India. “A person driving on 294 seeing the billboard for like two seconds might be a little confused about the situation in India. Especially because the main point is about a woman defending her right to wear a headscarf, but that is a protected right in the United States.”

Makki, who has been involved in activism campaigns, said that a hashtag or advertisements in local newspapers would be a better way to raise awareness. The billboard has three hashtags: #MuskanKhan, #HijabMyRight and #EducationMyRight.

“I think that if Americans knew about (the situation in India), they would care about it because it’s about the protection of religious freedom, and that’s an issue that Americans do care about,” Makki said. “So I think, maybe less focus on the image of a woman wearing a headscarf and more on the fact that India seems to be rolling back its protections of its religious minorities. And I’m saying that because I’m a Muslim woman, I wear a headscarf and this piece of clothing that I really spend maybe 30 seconds thinking about wearing every morning just to decide which matches the outfit that I want to wear is something unfortunately, other people have politicized so much ... I think that the issue in India is more than that.”

Ahmed, the GainPeace director, has received “two messages (like Makki’s opinion) out of a hundred positive ones.” He and Abdul-Jaleel said that this was the best way to communicate the message because they cannot “write a whole paragraph in a billboard.”

GainPeace hopes that people call the hotline (1-800-662-ISLAM) on the billboard or visit the website gainpeace.com to learn more about the situation in India, and get any questions answered about the Muslim religion, which there might be during the month of Ramadan. The hotline has received around 35 calls so far.

The billboard facing south on the northbound side of I-294, a half-mile before I-290, will be on display until April 22 and the GainPeace chapters in Detroit are working on putting a billboard with the same design in their community.

Mosques all over Chicago are organizing events where non-Muslims can join their Muslim neighbors to break fast and learn about their traditions. Additionally, Ahmed said that many mosques in the Chicago area are meeting with local representatives and legislators to raise awareness of the human rights issues in India involving Muslims.

“When our neighbors come inside the mosques and break bread with us, it’s just a whole different feeling,” Aamer Abdul-Jaleel said. “They leave happy because they’re just reading and hearing about Islam through the media, which doesn’t necessarily portray Islam in a positive light. But when they see what’s going on and they see what the prayer is like, they are like: ‘I can’t believe we used to live here for so many years and we never entered into the mosque.’ ”