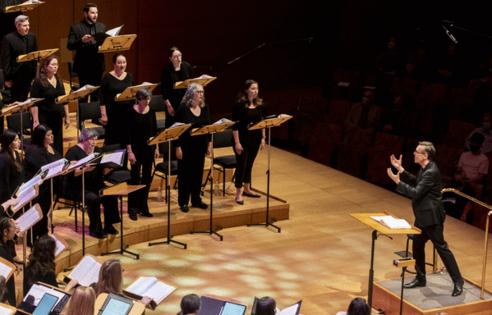 It begins with the violins — orderly and baroque. The choir rises. The audience rises. And before you know it, the concert hall, church, rec center or school auditorium fills with the triumphant sound of one of the most beloved musical works of the season: Handel's "Hallelujah" chorus.

Over the next four minutes (and change) the choir will repeat the word hallelujah 48 times, but the audience and musicians never seem to tire of it. Credit Handel's vibrant melody, but also the almost mystical power of that combination of vowels and consonants.

But what does hallelujah mean, exactly? And why does it continue to resonate with us, untranslated, thousands of years after it first appeared in the Hebrew bible?

And what is it about hallelujah that inspires composers and songwriters to deploy it so frequently and reverentially from Handel to Ray Charles to Leonard Cohen?

The Oxford English Dictionary defines hallelujah as "a song or shout of praise to God," but biblical scholars will tell you it's actually a smash-up of two Hebrew words: "hallel" meaning "to praise" and "jah" meaning Yahweh, or God.

But that's just the official meaning. For Grant Gershon, director of the Los Angeles Master Chorale, hallelujah is a perfect word because it can take on different meanings.

"It's this sound that is just so full of possibilities," he said. "You can fill it with whatever you need to say or communicate."