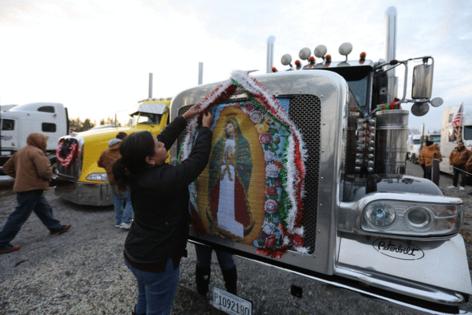 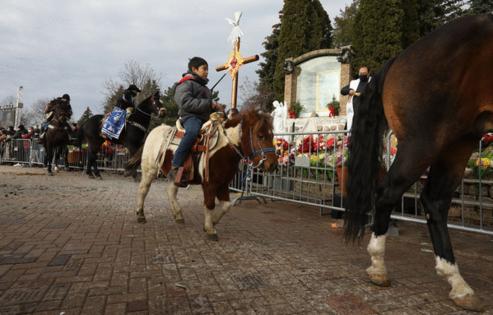 Then, soft clomps came from the east, steadily growing in volume and soon accentuated with neighing. Over the horizon, a cadre of horseback riders slinked toward its destination, some snapping photos on their phone and others proudly placing their arms akimbo.

That was the first sighting of at least 1,000 equestrians who rode through a Cook County Forest Preserve in Wheeling to pay homage to Our Lady of Guadalupe, or the Virgin Mary. Saturday marked the 10th kickoff of the tradition in which mostly Latino Catholics from across the tristate area and even the U.S. made the pilgrimage to Des Plaines to visit the Guadalupana’s shrine, the most visited monument of its kind in the United States.

Many make the annual journey to the shrine to mirror the pilgrimages done in Mexico to fulfill a promise — a manda ― or give thanks to the Virgin Mary for blessings and protection. Others do it as a sacrifice as they pray for a specific need or concern.

Arturo Gante, 48, said he traveled from Lake Station, Indiana, for his first pilgrimage to the shrine. While fixing the equipment on his horse named Colorado, he spoke of excitement over paying respects as well as praying for his family and his job.

“We’re just here to celebrate,” Gante said while tending to Colorado. “I’m Catholic, so that’s part of the church.”

Jenni Ochoa, a freshman at Eastern Illinois University, traveled to the shrine as a volunteer, fixing up the roses and other arrangements around the shrine. The visit has special meaning to Ochoa, who was baptized at the shrine’s church, but also to her elders, she said.

“It’s great just seeing everybody out here practicing their faith,” Ochoa, who grew up in Round Lake Beach, said. “Most churches were closed through the pandemic. The majority of the older Hispanic community, I feel like their faith is stronger, so it brings joy to them to be here.”

Before the journey began in the morning, Napoleon Abella Calzada, 16, watched as his father guided his horse to waltz back and forth on the grass. It was the boy’s first pilgrimage of this size, and he was in awe at the crowd that was prepared to join his father.