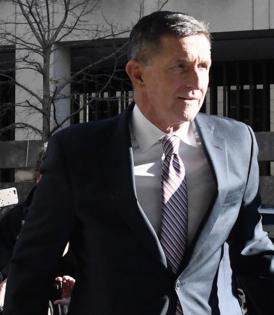 Flynn, the disgraced former national security adviser in the Trump administration, has found a new calling as darling of the religious right and, apparently, as a self-anointed historian. “I mean if you really study the 1500s, the 1600s, the 1700s, and how we were created as a Judeo-Christian country with the you know beautiful, beautiful set of values and principles that we have,” he said. “But now we’ve lost sight of that.”

Well, no. The United States was not “created as a Judeo-Christian country.” First, the term “Judeo-Christian” was not even invented until the 1890s. More to the point, the founders — many of whom were deists, not orthodox Christians — were highly suspicious of any attempts to favor one religion over another. That sentiment led to the First Amendment, which reads in part, “Congress shall make no law respecting an establishment of religion, or prohibiting the free exercise thereof.”

Any attempt to establish “one religion under God” would certainly violate the First Amendment, America’s best idea. The founders did not want the government dictating religious belief or favoring one faith over another. Any such attempt to do so, they believed, was tyranny.

It’s no secret that the First Amendment is under siege these days. Ever since the conservative takeover of the Southern Baptist Convention in 1979, we have lost our most stalwart defenders of the “wall of separation” that Roger Williams, founder of the Baptist tradition in America, prescribed back in the 17th century.

The great irony in Flynn’s statement and in the arguments for Christian nationalism is that religion has flourished in America as nowhere else precisely because faith is uncoerced. The First Amendment guarantees that.

The current surge in Christian nationalism, exemplified by Flynn’s comments, is part of a longer history of periodic attempts to whittle away at the establishment clause of the First Amendment. One of the Confederacy’s complaints about the Union during the Civil War was that the U.S. Constitution contained no reference to God, something the Confederate Constitution was careful to include.

A group of Protestants in the North sought to answer that charge by amending the Constitution to acknowledge “the Lord Jesus Christ as the Ruler among the nations, His revealed will as the supreme law of the land.”

A coalition of 11 Protestant denominations organized as the National Reform Association and met with Abraham Lincoln to enlist his support. The president wisely temporized, averring that “the work of amending the Constitution should not be done hastily.” Although the proposed amendment had several congressional sponsors, it never came up for a vote.

In 1947, in the early throes of the Cold War, a group called the Christian Amendment Movement proposed another constitutional amendment that read in part: “This nation devoutly recognizes the authority and law of Jesus Christ, Savior and Ruler of nations, through whom are bestowed the blessings of almighty God.” That amendment failed, although Congress added “under God” to the Pledge of Allegiance in 1954 and designated “In God We Trust” as the national motto two years later.

The most recent attempts to undermine the First Amendment occurred in the 1960s in the wake of the Supreme Court’s decisions regarding public prayer in public schools. Two amendments were proposed to allow public prayers, one by Everett Dirksen, Republican senator from Illinois. Fortunately, Mike Mansfield, majority leader of the Senate, was able to marshal opposition. “One’s religious practice is too personal, too sacred, too private to be influenced by pressures for change each time a new school board is elected,” the Democrat from Montana said.

The Dirksen amendment fell nine votes short of the two-thirds majority needed to pass the Senate.

I’m aware of no legislation now before Congress that would accomplish what Flynn advocated. That doesn’t mean that those of us who cherish religious liberty can be complacent. Given the mania for Christian nationalism these days, a flip in control of either the House or the Senate could alter that calculus.

On one part of Flynn’s rallying cry, I find myself in full agreement. He talked about the “beautiful, beautiful set of values and principles that we have.” I concur, and the most beautiful of all is the First Amendment.