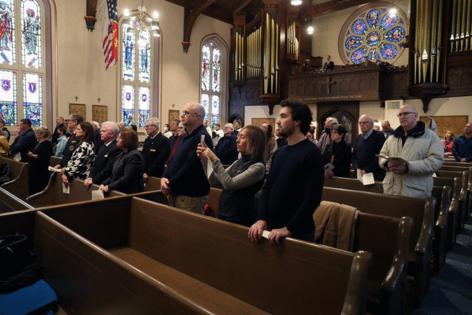 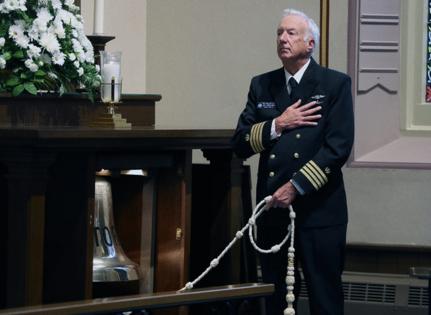 The annual service was held 46 years after the Great Lakes saw its latest shipwreck. On Nov. 10, 1975, the SS Edmund Fitzgerald, nicknamed the "Fitz," was headed to Detroit when a storm stopped it in its path. All 29 crew members died.

The Rev. Jeffrey Hubbard, who led Mariners' Church in its Great Lakes memorial service for the fourth year, said, "We are in a society depending on the work and service of the people we don't often realize. During the COVID pandemic, the phrase, 'essential workers,' became at the forefront of everyone's awareness, and these men and women are essential workers."

"While through our day-to-day lives, we aren't often aware of their work." Hubbard said. "We might not often give though to it, and yet, they're always out there, working for us."

Along with nine rings for sailors lost to the perilous waters of the Great Lakes, the church tolled the bell for a tenth time to commemorate military personnel, Hubbard said.

According to the reverend, the Mariners' Church was founded 179 years ago as a regional chapel for sailors and as a haven for the city of Detroit.

Both U.S. and Canadian officials waved their flags to commemorate the shipwrecks on Sunday. Last November, people from Canada were not able to attend due to border restrictions, Hubbard told the Free Press, but the church waved Canada's flag in their honor and sang their national anthem. The service was also publicly livestreamed on Facebook.

Resident historian Kathy McGraw told the Free Press that in terms of ship length, the Fitzgerald is known as the largest shipwreck in Great Lakes history.

"In terms of loss of life, there have been a few others that have had a few more. ... But in the Edmund Fitzgerald, it was total loss of life," McGraw said.

But the Fitzgerald shipwreck is not only known for its size.

Singer and songwriter Gordon Lightfoot memorialized the tragedy in his ballad, "Wreck of the Edmund Fitzgerald."

"Everyone who grew up in Detroit knows that song," Hubbard said.

Lightfoot ends his ballad with a reference to Mariners' Church: "In a musty old hall in Detroit they prayed in the Maritime Sailors' Cathedral / The church bell chimed 'til it rang 29 times for each man on the Edmund Fitzgerald / The legend lives on from the Chippewa on down of the big lake they call 'Gitche Gumee' / Superior, they said, never gives up her dead when the gales of November come early."

A recording of Sunday's memorial service is available on YouTube.