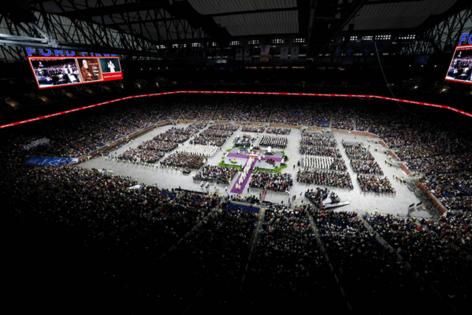 If canonized, Casey would join a rare group of American saints. While there are more than 10,000 saints in the Roman Catholic Church, fewer than a dozen are from the United States.

A 'premier citizen' of Detroit

Casey has been lauded as "one of the premier citizens of our city" by Detroit Catholic Archbishop Allen Vigneron, who added that Pope Francis "sees great holiness in Father's life."

The late priest is known for his great faith, humility and love of the violin. His significance also is tied to Detroit, which has wrestled with revitalization and deeply entrenched poverty.

For the beatification ceremony, nearly 70,000 people — from parishes across metro Detroit as well as from other nations, including Ireland, Italy, Guam and Panama — packed Ford Field.

At that event, many said they were saved by Casey's intercession.

Bernard Francis Casey was born in Oak Grove, Wisconsin, on Nov. 25, 1870. He was one of 16 siblings — 10 boys and six girls — whose parents were Irish Catholic immigrants looking to escape famine.

WASHINGTON — The Supreme Court has agreed to hear another religious rights claim from a conservative Christian, this time to decide whether a former high school football coach had a free-speech right to kneel and lead ...Read More