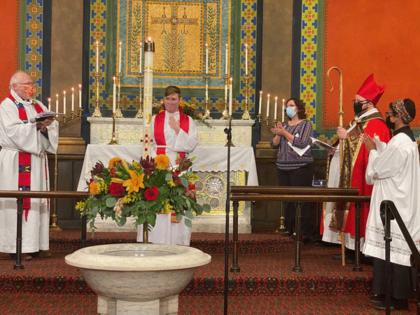 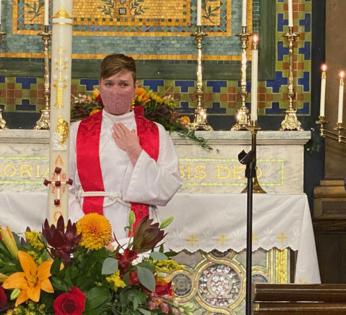 BALTIMORE — A service held Sunday at St. Mark’s Evangelical Lutheran Church signifies a new partnership between one of Baltimore’s historic churches and a fledgling congregation, both rooted in LGBTQ affirmation and inclusivity, generations apart.

The Rev. Emily Scott, who leads both congregations, was installed through a Rite of Installation, signifying her new role as pastor at the 161-year-old St. Mark’s church.

Scott founded Dreams & Visions in 2018 after she was called by a bishop within the Evangelical Lutheran Church in America to start a new congregation in Baltimore.

It’s made up of younger worshippers, like Julie Anderson, who joined in 2019 after being involved with the church’s Christmas pageant, which has cast a transgender woman to play Mary, Jesus’ mother, and featured drag queens in place of Christianity’s traditional three wise men.

It was a story she’d known all her life, “but it’s been made super queer and it really gave me a sense of belonging,” Anderson, who is gay, said. “I really, truly see a part of myself within it.”

The coronavirus pandemic took its toll on the new church. Meeting in person became a health risk, and Rituals, a Baltimore bar that had become the congregation’s de facto place of worship, was shuttered.

They began using an upstairs meeting space at St. Mark’s last year after partnering with the church on community outreach initiatives such as holding a “queer supper,” community meals cooked at St. Mark’s and given to lesbian, gay, bisexual, transgender and other food-insecure residents of the surrounding neighborhoods, Scott said.

The congregations sit under the denomination of the ELCA, a Protestant Lutheran church often largely rooted in progressive values.

The church ordains women as pastors and in 2009 removed sexual orientation as a bar for ministry candidacy, allowing gay and lesbian individuals in monogamous relationships to be ordained. Congregations within the ELCA split on the extent of that progressivism.

The church is not shielded from a widespread problem in religious spaces across the U.S. — attracting and retaining new congregants.