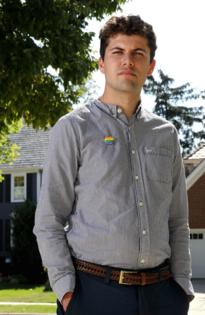 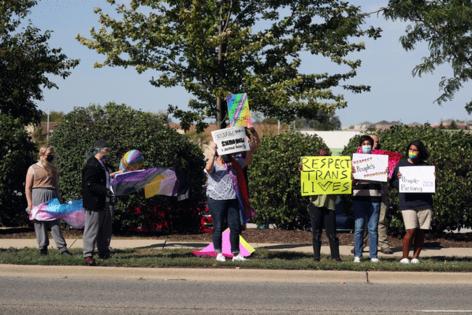 CHICAGO — Ora Amber, a 16-year-old ex-Catholic, stood across the street from St. Francis High School in suburban Chicago last week lofting a yellow, white, purple and black flag that represents people whose gender identity is outside the male/female binary.

Amber, who uses they and them as pronouns, was part of a small crowd rallying against the Wheaton, Illinois, school’s refusal to use such nontraditional pronouns for its students. It was the second protest in a week targeting the LGBT policies of suburban Catholic schools, and Amber, who left the church over its political stances, said its resistance to change was endangering its future.

“It’s incredibly depressing to see because the church has the capability to do some wonderful, amazing things, but they’re using it in the wrong way,” Amber said as honking cars passed by on Roosevelt Road. “I feel that if the Catholic Church wants to survive, it needs to get with the program.”

The discontent at St. Francis and Benet Academy, a Catholic high school in nearby Lisle that provoked outrage when it rescinded a job offer from a lacrosse coach in a same-sex marriage, is the latest sign of a church struggling to bridge the gap between old doctrines and evolving attitudes.

Pope Francis has taken a more liberal view toward gay Catholics than his predecessors, endorsing civil unions and saying homosexual “tendencies” are not sinful. He has drawn the line at same-sex marriage, though, recently telling reporters, “These are our brothers and sisters and we need to be close to them but marriage as a sacrament is clear.”

That position appears out of step with the faithful. Gallup polling, which tracks views toward same-sex marriage, found last year that nearly 7 in 10 U.S. Catholics — a higher proportion than the general population — believe it should be recognized as valid.

“Kids who are in middle school and high school today have grown up in a world where queer people and gay people are more accepted than not, and are visible in every aspect of society,” said Marianne Duddy-Burke of DignityUSA, a group that advocates for LGBT Catholics.

“They understand that discrimination is not in keeping with Catholic values, and they don’t have the same reticence that people of my generation have in challenging the church.”

Gay Catholic school employees have often been fired when their employers learned of their sexual orientation. Litigation has usually been fruitless as courts have cited religious exemptions to anti-discrimination laws.