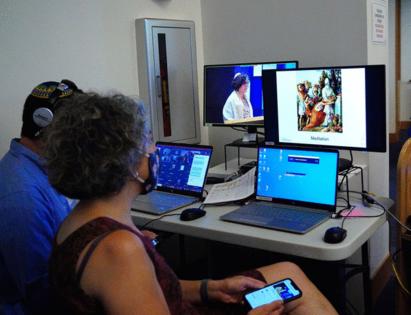 In many cases, those hopes were dashed as the surging delta variant and rising COVID-19 case counts in Illinois have lead to continued unease around large indoor gatherings.

With the first night of Rosh Hashana, or the beginning of the Jewish new year, starting Sept. 6, and Yom Kippur, or the day of atonement, starting the night of Sept. 15, Chicago-area congregations are planning for a second straight year of untraditional formats, outdoor gatherings and plenty of livestreaming.

“As a human being I am feeling the same sense of frustration as everyone else,” said Rabbi Debra Newman Kamin of Am Yisrael, a conservative synagogue in Northfield. “At the beginning of the summer we thought COVID was in the rear view mirror, and my sermon for Rosh Hashana was to be ‘Isn’t this amazing?’ I had to scrap that and do something else.”

“A lot of people are still hesitant to come in person because they are concerned about the uptick in the number of COVID cases, or they don’t want to sit in a service masked for an hour or two,” said Rabbi Andrea London of Evanston’s Beth Emet The Free Synagogue, a reform congregation.

The Jewish United Fund of Metropolitan Chicago recently conducted a survey of local congregations, with 36 responding with their plans for the high holidays. Twenty-seven reported they would offer a hybrid approach to services, eight would only be in person and one will conduct services exclusively online.

Among the many opting to use the hybrid format was Congregation Beth Shalom, a conservative synagogue in Northbrook.

“Some may have been disappointed that we weren’t planning for a normal holiday, but we knew that no matter what we still wanted to err on the side of safety,” noted synagogue spokeswoman Deanne Friedman. “We have gone along for 18 months knowing that safety and comfort for everyone was our number one (goal) and we couldn’t change that now. This is still a year of transition and we had to continue with that through the holidays.”

That some people are set to observe the holidays in person — often adhering to capacity limits — is a change from last year, when in pre-vaccine times many congregations were strictly remote.