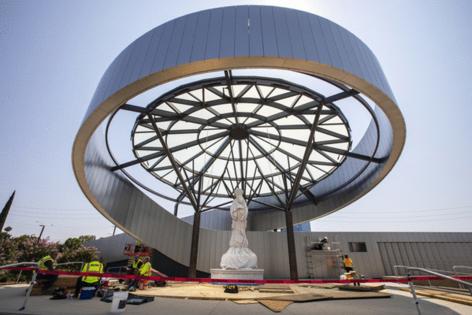 With a selfie stick decked in images of the old South Vietnamese flag, Vinh Hoang of Houston narrated for a Facebook post.

After it is unveiled this weekend, the 12-foot-tall Virgin Mary, as she is believed to have looked to persecuted Catholics in Vietnam's La Vang forest in 1798, is likely to draw many faithful like Hoang from all over the Vietnamese diaspora to Christ Cathedral in Garden Grove, California.

"We are awaiting the grand opening of this location where all of us are welcomed to celebrate the Blessed Mother's presence," Hoang, who has lived in Texas since the 1990s, said to his Facebook followers in Vietnamese.

Built with more than $12 million in donations, Our Lady of La Vang is the first large-scale rendition in the U.S. of a figure sacred to Vietnamese Catholics.

The Italian marble statue dressed in a high-collared Vietnamese ao dai and traditional hat, with a baby Jesus in her arms, is capped by a spiraling canopy designed to evoke the rainforest where she made her appearance.

It is a crowning symbol for a predominantly Vietnamese American and Latino congregation occupying the landmark glass cathedral built by televangelist Robert Schuller.

The Diocese of Orange bought the former Crystal Cathedral and extensively renovated it, holding a dedication mass in July 2019.

After livestreaming during the pandemic, Masses in Vietnamese, Chinese, English and Spanish are back at the cathedral, which seats nearly 3,000 people.

The larger-than-life statue will be introduced to the public on Saturday with a blessing, Mass and festival.