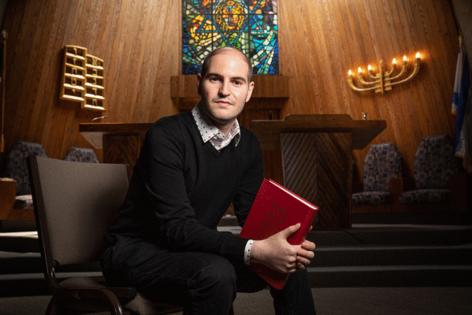 Rabbi Michael Perice told his Burlington County, N.J., congregation Monday that he has been in recovery from opioid addiction for 10 years and hopes to help lift the stigma on people experiencing substance abuse disorder or other mental health challenges.

Perice, 35, of Philadelphia, made the disclosure during a Zoom call with more than 80 members of Temple Sinai in Cinnaminson, where he was named rabbi in 2020.

About half of the 130 households in the congregation participated in the 40-minute call, during which their rabbi told them he "innocently and tragically" became dependent on prescription painkillers after a car accident in 2007. He said opioids dominated his life until he began medically assisted addiction treatment in April 2011.

"I told my congregation the reason I'm sharing this is because they trust me every day with the most vulnerable parts of their lives," Perice said after the call. "What would it mean if I couldn't trust them the way they trust me?

"I was overwhelmed by the support that this community showed me," he said. "I've heard from probably 50 people, sharing personal stories, congratulations, all the nice things you would hope to hear after sharing something like this."

Recovery has "opened me up to a whole world of possibilities" and was integral to his becoming a rabbi, said Perice. He envisions Temple Sinai getting active in educational and advocacy efforts around addiction issues.,

"For someone like the leader of our community, for whom people already have a lot of respect, to admit to having gone through a situation like this, it means that other people don't have to be afraid to talk about it," said Schoss, 60, who lives in Moorestown.

Said immediate past board president Stacey Blacker: "I had tears in my eyes as I watched individual reactions to what the rabbi said during his presentation, and I was moved by the people I heard from afterwards."

The reactions "are in keeping with how we have embraced the rabbi and his wife, Rachael, and how they have embraced us," said Blacker, 53, of Manahawkin.

Addiction "is still something that is thought of as taboo, but if our rabbi and our community can help in any way, it's huge," she said.