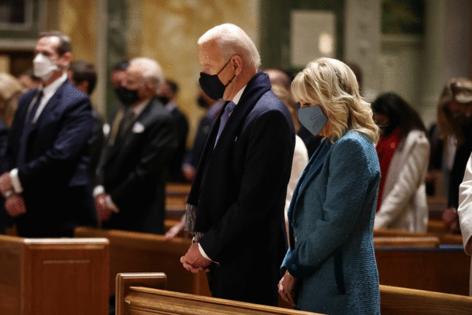 In targeting America’s second Catholic president with a threat to deny Joe Biden the Eucharist over his abortion rights support, U.S. bishops risk deepening what is already a destructive rift among the nation’s Catholics. It also puts the bishops at odds with a president who is far more aligned than his political opponents are with the church’s humanitarian outlook — while also putting them at odds with Pope Francis. This is the kind of mistake that could make the church less politically and culturally relevant than ever in the U.S.

On Friday. U.S. Conference of Catholic Bishops announced it had approved a plan to draft guidelines for receiving communion. The conservative bishops who pushed the measure intend to use it to deny that holy sacrament to Catholic political leaders, including Biden, who don’t fall in line with the church’s stance of denying women’s right to access abortion.

Francis — who has allied himself with Biden on numerous issues including poverty relief, climate change and racial equality — warned the American bishops in a Vatican letter that a confrontation with Catholic politicians over abortion would “become a source of discord rather than unity.”

In their virtual debate last week over the issue, some of the bishops made clear they won’t heed that wise advice. Bishop Liam Cary of Baker, Oregon, lamented that America has “never had a situation like this where the executive is a Catholic president who is opposed to the teaching of the church,” The New York Times reported.

The comment reveals the self-destructiveness of the bishops’ argument. Biden is only the second Catholic president; the first, John F. Kennedy, had no significant differences with the strictures of his faith (abortion wasn’t a mainstream debate then), and still he had to strain to convince skeptical voters that he wouldn’t come under the church’s thumb. The bishops, by effectively demanding that Biden check every box on their political agenda or face what amounts to official church sanction, have confirmed to the world that they do, in fact, expect him to be under their thumbs. What a gift to anti-Catholic bigots everywhere.

This myopia regarding abortion is common across the religious right, which often seems to care about the unborn to the exclusion of the born. Biden ironically is among the most genuinely devout presidents America has ever had, with a philosophy of aiding the weak and vulnerable that broadly mirrors that of his church. Does that count for nothing?

While the decision to draft communion guidelines is ominous, the guidelines themselves aren’t complete. It’s not too late for the Vatican to more forcefully press the bishops to rethink this unnecessary attack on a president — indeed, on an entire political party — which, from the church’s perspective, makes perfect the enemy of the good.