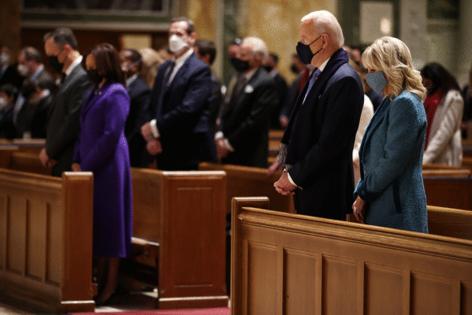 “That’s a private matter and I don’t think that’s going to happen,” Biden told reporters Friday at the White House.

The U.S. Conference of Catholic Bishops voted Friday at their annual spring meeting to create guidelines on communion, which could lead to U.S. politicians who support abortion rights being denied the sacrament, The Washington Post reported.

The Vatican has cautioned American bishops against the move, The New York Times reported. Pope Francis preached earlier this month that communion “is not the reward of saints, but the bread of sinners,” according to the Times.

The Post reported that the issue is dividing U.S. bishops, though they voted overwhelmingly Friday to create a document on the meaning of the Eucharist, 168-55 with six abstentions.

Sixty Catholic Democrats in the House of Representatives released a “statement of principles” on Friday that declares, “no political party is perfectly in accord with all aspects of Church doctrine.” They outlined some of their own positions that align with the church, including combating poverty and supporting expansions of education and health-care coverage.

“The Sacrament of Holy Communion is central to the life of practicing Catholics, and the weaponization of the Eucharist to Democratic lawmakers for their support of a woman’s safe and legal access to abortion is contradictory,” they said, urging the bishops to abide by Pope Francis’ guidance.

“No elected officials have been threatened with being denied the Eucharist as they support and have supported policies contrary to the Church teachings,” they added, “including supporting the death penalty, separating migrant children from their parents, denying asylum to those seeking safety in the United States, limiting assistance for the hungry and food insecure, and denying rights and dignity to immigrants.”

Two soldiers waved our van to the side of the road, where a mangy dog finished his scratch before ambling out of our path.

I was drenched with sweat in the tropical heat and humidity, as were my traveling partners. Along ...Read More

PITTSBURGH — A group representing some Pittsburgh priests and lay people issued its support for same-sex unions and LGBTQ people in response to the Vatican’s declaration this spring that the Catholic Church does not ...Read More