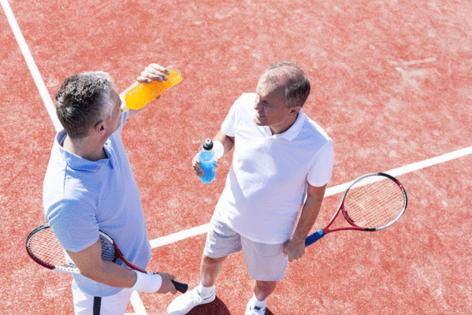 Maybe it’s an old friend who has opposing political views. Or maybe it’s a neighbor who denies needed changes in your homeowners association.

We live in a world where many arguments become a headline. We wonder if there are many sane people left.

“I got into a verbal fight at my high school reunion,” says a banker we’ll call Troy. Some of the attendees attacked my choice for a local political candidate. In looking back, I overreacted. I should have ignored the comments and lightened the mood.”

To restore some harmony in your world, keep these points in mind. Each of them helps to ease tension:

— Stop emphasizing your differences. Instead, find points you agree on. Any fool can argue and upset other people. It takes a mature person to hold an intelligent discussion.

— Keep in mind that others don’t think like you do. For example, they may view the world as a more hostile place than you view it. These types of people might have trouble trusting those who are too mild-mannered. They feel safer around aggressive, opinionated leaders.

— Don’t abandon your sense of humor. Laughter can recharge your batteries when you’re feeling drained or depressed. Try to lighten the mood for yourself and others, whenever possible.

— Realize that your own views can quickly change. Most of us can name situations where our opinions changed instantly once we had more facts.

While it’s critical to honor your own morals, don’t believe that a short lecture will change anyone. Instead, try to find common beliefs. State points you know the other person will support, such as having a better economic future.

“My son’s in-laws are always voicing extreme political views,” says a nurse we’ll call Raven. “I finally figured out that we are co-grandparents. The children are what we have in common. Nothing outside of the children’s well-being is going to bother me. I just let them talk, and I try not to get worked up.”

A divorce attorney we’ll call Anderson says, “Almost every couple getting a divorce could have avoided it,” he declares. “All of them should have found more things to agree on than disagree on. It’s a delicate balancing act. A second marriage is usually just as difficult as the first. So I wish more people would try to get it right the first time.”

Tension only eases between two people when they find common ground. Be vigilant to understand what others like and don’t like. Try to quickly gasp what makes someone happy.

“It’s perfectly OK to manipulate a situation,” says a family counselor we’ll call Ronald. “If you know someone is going to criticize your cooking, don’t invest four hours in the meal. Order from a restaurant, for example, and serve that. Do what you need to do, so your own mental health is protected.”

Ronald says it wastes so much energy to avoid our critics. “Stop trying to win them over,” he advises. “Instead, ask them about their own activities and goals. Steer the conversation to them and away from yourself.”

“I start these conversations off with a compliment,” says Ronald. “This disarms a would-be critic. Brag on their hair, their car or their children. Very few people are going to pick a fight with you, if you’re paying a sincere compliment. Compliments cause tension to melt.”

Do you know some well-balanced “sensitive” men? They feel comfortable showing a few emotions and talking a little more intimately than most men do.

If you do know such people, count yourself lucky. Tough, macho men ...Read More