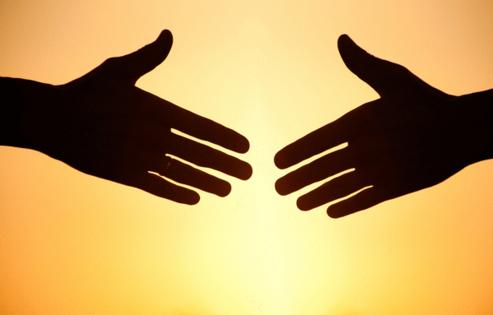 Are you fighting with friends who support a different political party than you? Are you angry with your sister because she just got some flamboyant tattoos?

Differences can tear any two people apart. However, finding common ground can bond you in ways you never expected.

It takes good communication and careful thought, but we all need to build common ground with opponents. Our viewpoints need to change somewhat, in fact, or we are failing to grow.

"When I was younger, I was a feminist to the core," says a 69-year-old woman we'll call Tina. "My friends and I would ague about topics like abortion. Now, strangely enough, our views have flipped. We all take the opposite side from the days of our youth!"

Any two people, regardless of current beliefs or core values, can find more reasons to agree than disagree. All over the world, people basically want the same things: a loving family, safety and security, healthy food, a social life, and enough money to cover expenses.

"People in all foreign countries are basically just like us," says a psychologist we'll call Deborah. "They are not our enemies in terms of key beliefs in life."

Every person alive wants to have good feelings and solid control over life. We all want self-esteem, respect from others and rules that benefit as many people in our circle of life as possible.

"My brother is a Republican, and I'm a Democrat," says a history professor we'll call Paul. "I worked hard to put myself through college and I still worry about money a lot. When I sat down to talk with my brother, it was amazing how many core values we share."

Paul and his brother differ on how to obtain certain goals. But in the past few weeks, they've tried to define what they do agree on.

"We both worry about homeless people, people with no access to good health care, and young people who are struggling to stay in school," says Paul. "We decided to start a nonprofit together, so we can mentor local citizens who are 15 and over. We're hoping to get a grant from two local businesses to drive our efforts."

As Paul and his brother keep defining goals, they see that great leadership is the best tool for every community. Without leaders who care, neighborhoods and towns will crumble.

A town commissioner in a small Arkansas community says electing moral leaders who love people is one of the most powerful tools on the planet. We'll call this official Barbara.

"Politics might mean our approaches are different," says Barbara. "But let's agree that watching over resources, guarding all budgets and holding ourselves accountable must be in place. I'm tired of watching money disappear rapidly in our area with nothing to show. We now have a community watchdog program in place for officials governing expenditures."

Barbara's husband, Andy, said he believes great change comes from leaders listening intently to people who are not leaders. "Average citizens are brilliant at describing what needs changing in our community," says Andy.

"When my wife's uncle sat down with factory workers at a company he owns, he learned so much," Andy explains. "The biggest complaint was these folks had no college fund for their kids. Uncle Jack got busy with the company accountant to build savings accounts for workers' kids. When workers are creating a nice savings account for their families, with the company adding to it, they want to come to work. Working on this common goal is building loyalty."

Do you need to speak up and tell the truth about something? If you can't, you might be a victim of abuse.

Those who don't respect your feelings will make you fear speaking up. How? They'll use anger and other emotions to ...Read More

Maybe it’s an old friend who has opposing political views. Or maybe it’s a neighbor who denies needed changes in your ...Read More