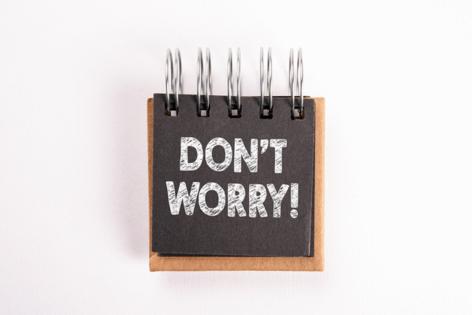 With all the ruminations we go over daily, it is amazing how easily what we once perceived as problems, even some trauma, can disappear instantly when an even bigger problem comes along. I can imagine a family in Ukraine arguing over household chores the night before the missiles started hitting their innocent targets.

We carry with us many memories, and unfortunately, if you tend to be hard on yourself, you carry every mistake you ever made right along with you, in your head, wherever you go. But if you suddenly get your life upended, those mistakes will become a learning tool very quickly. When you have to survive, you get very innovative and you don’t have time for petty arguments or thoughts.

The world’s biggest problems remain unsolved. We still have COVID-19. Now we have inflation and a looming recession, which makes me think the people in charge have no idea what’s really going on. These are some big problems, but your own personal problems may be more immediate and urgent because they are happening directly to you, not just around you.

Getting some perspective on whatever is going on will help you find your way through it. For example, you may be so worried about something happening in the future that you have no room to think about anything else. You may have other problems that you no longer have time to ruminate over. Not exactly a brass ring, but if you know you are focusing 90 percent of your energy on one problem, it can allow you to see that what used to keep you up at night wasn’t as bad as you thought.

Say what you will, but I witness people experience this quite often, and once they realize what they are doing, it empowers them to take more control in their lives and also to let go of what was controlling them.

For example, a veteran who was being treated for PTSD stopped having nightmares when his taxes got audited. Not a recommended cure, but it did lessen his symptoms, and it gave him more inner strength to fight them. Once he recognized this was happening, he believes that it gave him the strength to also beat the audit.

This is not about distraction but about watching yourself as you go through a difficult process and using the knowledge you gain to help you deal with the issue at hand. At the same time, you are also rebuilding your defenses against the demons of the past and decreasing their power, perhaps to a large extent.

The other thing that you will see is that your ability to relax (after you solve the big problem) increases, sometimes dramatically. Some clients suffering from anxiety, whose issues were so bad they couldn’t even watch a TV show, are suddenly bingeing on Netflix after realizing that most of their issues were in their head.

Perhaps it’s some kind of Reality Therapy not yet studied, but it’s also just common sense. If a big problem—one that’s keeping you up for a couple months—gets resolved, you will sleep much better when it’s over, because the other problems you’ve been carrying around have gotten smaller or have maybe even disappeared.

If you wanted to play Steve Harvey and survey 100 people about a situation that makes someone nervous, a lot of people would probably answer “a first date.” It may even be the number one answer on the board — and for...Read More

TAMPA, Fla. — Shiine and Angel Thompson met at a sorority event and had their first date at a Brandon, Florida, bowling alley.

So when Shiine Thompson proposed, she surprised her intended by doing it at that same ...Read More

If something in your life is giving you anxiety or making you feel depressed, there’s a simple way to deal with your emotional distress. This technique has helped many, many people.

When you have an issue going on, you ...Read More

As a dating coach, I get a lot of interesting questions, and some of them come up more often than others. For that reason, I wanted to share a Q&A on two of my clients’ most common questions:

The expression “benign neglect” means that neglect, or lack of attention, was intentional and done supposedly to help someone or something. That may work well for a cactus, but not another human being, and what if that...Read More

The sun is shining, the birds are chirping, the bees are buzzing, and the air conditioning is on — summer is almost here.

In the world of dating, summer is usually associated with more casual flings, while relationships...Read More