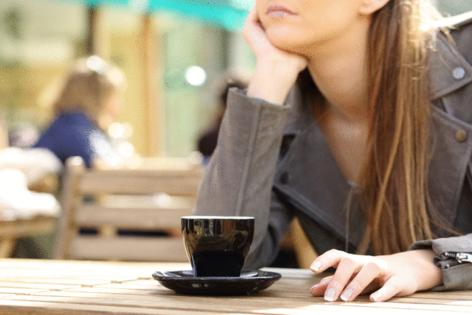 It was 11 a.m. on a recent Sunday. My friend Stephanie was looking forward to meeting her date for a brunch they had scheduled over a dating app. She got there on time, sat down at a table and waited, assuming she had just beaten him there. When she finally texted him to ask where he was, she saw he had written, “I’m here.”

It should have been a no-brainer at this point. Her date should have apologized, gotten in an Uber, and raced to where Stephanie was waiting. Is that what he did? No.

He asked her to come meet him, which wasn’t feasible for her because she had an appointment after the date she had planned conveniently located near the date. Rather than doing the kind thing (he never even offered to come to her), he wrote back to her, “This won’t work. Have a good day.”

Appalling. Stephanie handled it like a champ. I could have pictured myself rhetorically yelling, “Are you kidding me?”

Next, I received a text from a client yesterday saying she got stood up. Apparently her coffee date texted her to cancel while she was on her way to the date itself. When did she see the text? After she arrived. And another client told me someone didn’t show up for their prearranged Zoom date this past weekend. (Yes, a video date is still a date!)

Then there’s me. I had once scheduled a date with someone from a dating app. We had discussed meeting for a bagel at 10 a.m. on a weekday since we both had flexible work schedules. (And this was pre-COVID!) He even joked that he had never been on a “bagel date” before. We confirmed the place and time, and the evening before the date, I logged into Bumble to review his profile again and give him my number in case he needed to be in touch the next day.

His profile? Gone! Did he unmatch me?? But we have a date! Would he be so rude as to not tell me he was canceling on me and just — poof — disappear? After some internal debate about what to do, I still went to the planned location at 10 a.m. My date did not. (And, to add a salt bagel to the wound, the food there was mediocre at best.)

The important lesson here is that no one’s time is any more valuable than anyone else’s. Canceling at the last minute or, worse, standing someone up, is the lowest of the low. You are essentially telling this person, “I am more important than you are.” It is not OK.

Why are people flakier today than years ago? Smartphones have a lot (if not everything) to do with it. You can cancel without seeing someone’s reaction. You don’t have to incur the ire of someone if you don’t show up… you can just block them. But remember that there is an actual person at the end of that phone. A person who has set aside time to meet you. A person whose feelings you just hurt. Sure, there are valid reasons to cancel, but just remember that your time is no more valuable than someone else’s. So be a stand-up person — don’t stand someone up.

My mother-in-law is going home to Europe after an extended stay, and I am going to really miss her. Since we’ve been living in COVID-world, life has been much less social, and having this very nice person around — even...Read More

I recently held an “Ask Me Anything” session on my Instagram page, soliciting any and all dating questions that were on people’s minds as we enter 2022. One I want to highlight this week is the following:

Sometimes as soon as you solve one problem, another pops up to take its place. If you’re lucky, you get a problem-free day in between. The key is learning to take these problems in stride and navigating through them as ...Read More

Every year we get a chance for a symbolic fresh start and new beginning. 2022 is no different, but then again, it is. We are still living with COVID-19, which changes a lot of things. This is our new-normal new year, and ...Read More

In some ways, it feels like 2021 flew right by, and in others, it feels like it was the never-ending continuation of 2020. Let’s hope 2022 brings more health and happiness to much of the world.

Last March, I wrote my first article about COVID-19 and dating, thinking things would subside in a few weeks. And then I wrote another one a month or so later. Then another. And now another. I never thought I’d be ...Read More