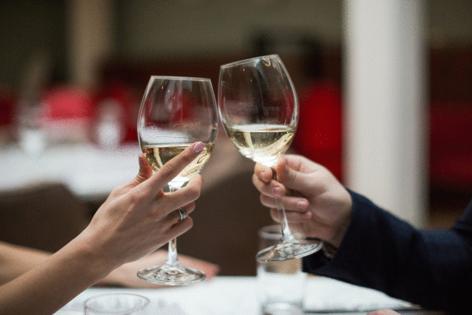 We’ve all been there: You’re introduced to someone at a party (isn’t it fun that gatherings are slowly re-entering our lives?), and by the time you can finally excuse yourself from the conversation, you know everything from the details of this person’s recent breakup to presidential election choice. Heck, there’s one occasion that comes to mind where a guy told me his iPhone passcode ... and I wouldn’t have been surprised if he blurted out his Social Security number while he was at it!

It’s called oversharing, and it’s a bad idea ... especially when it comes to dating.

Meeting new people can be intimidating, which sometimes leads to a case of TMI in an attempt to get the conversation flowing. While sharing all the reasons why you and your ex didn’t work out may feel like you’re being vulnerable and creating a connection, you’re really just giving off red flags. There is such a thing as too much, too fast — and it could make you look hung up on the past, uninterested in the date or critical of your date’s beliefs.

A lot of people defend oversharing as wanting to be “upfront” about their wants, but asking the “big” questions off the bat — regarding religion, politics, money, having kids, relationships with exes — doesn’t make you get a better idea of the person. You’re really trying to rule out those who don’t give the answer you want to hear — and that quickly depletes your pool of candidates.

Remember the old adage of topics to avoid during a polite conversation? Those apply to a first date as well. The first date is to see if you connect — if the conversation flows, if you have some things in common and if you’re comfortable around each other. The talk about politics, religion, finances and more will come after you’ve established whether you even enjoy each other’s company. You wouldn’t walk up to strangers on the street and ask how much money they make, so why would you do it on a first date?

It’s natural to be curious about things like a previous relationship, but it’s not something you should ask about (or share) right away. And if you are asked, dismiss the topic by saying something like, “Although that didn’t work out, I’d rather focus on the present right now” or “I learned a lot from that experience, and I’d be happy to share more once we get to know each other a bit.” (A similar remark will work if your date launches into an overshare moment.)

In a world where Instagram and Facebook are there to constantly remind you that your friends are getting married, having children, and welcoming grandchildren, there’s a pressure to find “the one” — and quickly rule out anyone who is not it. However, a first date shouldn’t turn into an awkward game of 20 questions. Your introductory meeting is a chance to get together and see if you “click,” as cheesy as it sounds. For a first date, keep the conversation lighthearted, positive and fun — if things work out, you’ll have plenty of time to talk about the heavier stuff later.

Getting your start in life as an adult has become harder and more complicated than it was in the past. The pandemic has made things even more challenging. Here are four tips to help you reach your dreams. All of these I ...Read More

A few years ago, when talking about the topic of online stalking or “researching” or whatever you want to call it, I would have said doing it before the date is not only not the norm, it’s also on the creepy side.

We all have days when we have no energy, and if you use some creativity, you can make these days work for you (even if you have to drag yourself out of bed). It’s OK to move a little slower, as long as you keep moving. ...Read More

Procrastination is something we all would like to do less of, but change of any kind takes mental discipline and emotional fortitude. Here are seven different approaches to procrastination.

Everyone wants that perfect meet-cute. You sit down next to each other on the airplane. Sparks fly. You talk the whole time. You exchange information. Boom. Match made in … the sky.

While all that sounds just lovely, ...Read More

CHICAGO — When we see someone for the first time, we interpret many tiny things.

In fact, at least 42 things — that’s how many muscles make up the face.

But since the pandemic began and mask-wearing became crucial,...Read More