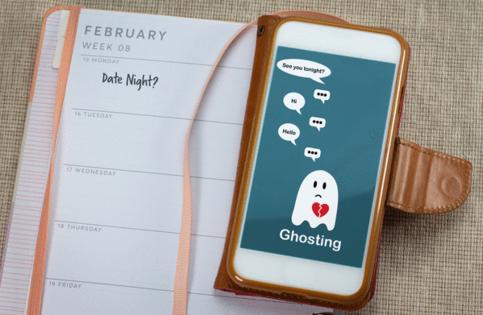 Dating, always fun at first, often starts with a flurry of romantic text messages, frequent pinging of sweet sentiments, followed by in-person meetings. But more and more, it ends in silence — when one person disappears.

The modern phenomenon known as “ghosting” continues to grow, yet research on this breakup trend and how will it influence people’s future relationships is scant.

In a recent study, Dr. Royette Dubar, assistant professor of psychology at Wesleyan University, and Jhanelle Oneika Thomas investigated the definition, motivation and psychological impact of ghosting in the age of social media and hypervisibility.

From this research, social media ghosting is defined as a dissolution strategy in a platonic or romantic relationship captured by a sudden or gradual decision to cut off all online and/or in-person communication with someone without a clear explanation.

While social media is not a requirement in ghosting, it does play an integral role as it maximizes the communication within the relationship through different outlets.

Dubar and Thomas found that both the ghostee — the person being ghosted — and the ghoster experience negative consequences from ghosting that result in internalized emotional conflict.

For ghostees, the impact primarily has come from the lack of closure in the relationship, leading them to “spiral” into internalized self-deprecation and paranoia, Dubar says.

“It becomes a lot of self-doubt at first. I think a lot of personal insecurity comes out when you don’t have the answers, so you question yourself and you blame yourself,” a 19-year-old female participant in the study said.

While the ghostee faces theses negative consequences, Dubar says “it is possible for the ghostee to come out on the other side feeling more positive, more resilient and even more confident over time.”

For its first few years, Teleparty seemed doomed to be a niche product. The browser extension, which lets multiple people sync up their Netflix accounts so they can watch the same thing at the same time, was a hit among ...Read More

In this week’s edition of “Ask Erika,” clients ask dating questions ranging from texting to cynicism to closure.

Q: [He] rescheduled our meet for next Saturday, which is no problem, except that all he does is text. ...Read More

Many of us hold false beliefs about happiness. Those beliefs can actually prevent us from feeling good about ourselves and enjoying life.

Here are some of the things we believe and say to ourselves about happiness that ...Read More

CHICAGO — Looking back, Allison McCorkle can laugh at all the signs she missed: There was that time in sixth grade when the cool boy her friends were swooning over called to ask her out. Not only was McCorkle ...Read More

NEW YORK — Last week, Kate Zhang snapped up a wedding dress at a bridal store in Manhattan. It was only her second appointment.

Her decision to get married was slightly less hurried. Zhang and her fiancé, Harrison Li, ...Read More

I recently remembered this article in Business Insider I read a few years ago titled “Posing this simple question to a first date will help you decide if you have a future together.” As a dating coach who gives plenty ...Read More