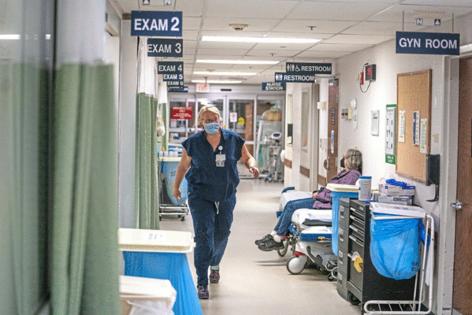 PITTSBURGH — You can remove the term "tripledemic" from your vocabulary — for now.

As respiratory viruses ticked upward in late November, health officials braced for what they called a "tripledemic" of RSV, flu and COVID-19 cases leading to widespread infection, causing a flood of patients to hospitals and leading to hourslong wait times.

That winter surge represented a respiratory virus peak, and experts say cases are now declining. Nationally, the week ending Jan. 14 saw 72,119 total respiratory cases, down from 235,850 the week of Dec. 3, when cases peaked.

COVID-19 dashboards showed a slight uptick in infections and hospitalizations in November and December, the same time flu and RSV were surging, and patients were visiting hospitals with respiratory complaints. Preliminary data for January shows COVID-related deaths have dipped.

"In the past month or two, we've seen a fairly steady decline in the number of children positive for various viruses," said Dr. Raymond Pitetti, chief of pediatric emergency medicine at the University of Pittsburgh Medical Center Children's Hospital. Data from the Centers for Disease Control and Prevention shows that, nationwide, infants and school-age kids were hit hard by this respiratory virus peak, specifically flu and RSV.

"We've been able to manage ER volume by adding resources" like staffing ICU units and recommending patients with mild flu and RSV symptoms see their primary care providers instead, he said. "The decline in RSV in the community has helped us tremendously."

Dr. Don Whiting, chief medical officer for Allegheny Health Network, said many of the COVID-19 cases caught in his network's hospitals have been a result of "secondary diagnoses," wherein patients check in for other reasons like surgery or diabetes and test positive for the virus. "They're not necessarily symptomatic," he said. "People are surprised."

This can be partially attributed to omicron variants causing generally milder infections, although recent research shows there's still a risk of developing long-COVID.

Flu arrived early this season with higher-than-normal cases, hospitalizations and deaths. Some health officials are bracing for a second wave — as is typical, because the two main flu strains, Influenza A and B, peak at different times.

"I am expecting an influenza B season sometime in the next month," Pitetti said. "But there's no way to predict what the spike will look like."

Many people aim to start the year off with healthier food choices. But how do you choose between seemingly similar foods, snacks or beverages? How does a bagel with cream cheese compare to toast topped with avocado, for...Read More

The President’s Emergency Program for AIDS Relief, or PEPFAR, has revolutionized the fight against global AIDS over the last 20 years. In that time, the U.S. program has brought antiretroviral treatment to nearly 19 ...Read More

Yet another community is stricken with grief in the wake of the horrific shooting at Monterey Park, California, on Jan. 21, 2023, that left 10 people dead and 10 more wounded. Families and friends of the victims, as ...Read More