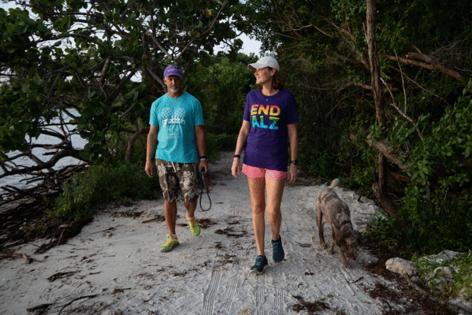 New data on lecanemab, which is manufactured by Biogen and Esai, was published last week in the New England Journal of Medicine that showed people who took the drug experienced “moderately less decline on measures of cognition and function.”

However, some patients also experienced negative side effects like brain swelling and bleeding — meaning people with early Alzheimer’s disease should be aware of the risks before seeking treatment.

How does it work?

Lecanemab decreases the amount of amyloid plaque in the brain. The protein deposits have long been hypothesized to be linked to the progression of Alzheimer’s.

The theory goes like this: Decrease the plaque and you’ll slow the effects of the memory disease.

The new data on lecanemab provides the strongest support for that theory to date.

“That is huge because it gives the person living with the disease an opportunity to be able to live at a higher level of functioning in their life,” said Keith Gibson, director of diversity, equity and inclusion at the Florida Alzheimer’s Association. “It gives them a greater chance to be as normal as possible before the disease really runs its full course. We’re very, very excited about that.”

The 18-month study, which was funded by its manufacturers and involved people aged 50 to 90 with early Alzheimer’s, nevertheless concluded by noting that “longer trials are warranted to determine the efficacy and safety of lecanemab in early Alzheimer’s disease.”

Who can take it?