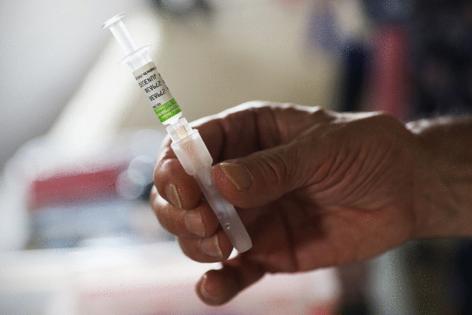 PHILADELPHIA — For years, scientists have tried, and failed, to make a one-and-done vaccine that would provide at least partial protection against all types of the flu.

A University of Pennsylvania scientist now thinks he has cracked the case, using the same technology that was the basis for the Pfizer and Moderna COVID vaccines: messenger RNA.

In November, Scott Hensley and his colleagues announced promising results from testing this universal flu vaccine in lab animals, and now they are making plans to test it in humans.

The vaccine would not take the place of annual flu shots, which are tailored to match the strains of flu circulating that year. Instead, it would offer a baseline level of protection against the 20 broader types of the flu — likely not preventing infection in most cases, but sharply reducing the risk of severe disease, said Hensley, a professor of microbiology at Penn’s Perelman School of Medicine.

“Can we make a vaccine that primes our immune systems against every influenza subtype, including those that are already circulating in humans and also those that have not made the jump from animals?” he asked. “That’s really our goal here.”

When scientists have tried to make universal flu vaccines in the past, the formulas typically consisted of ancestral protein fragments that all flu viruses have in common. For a variety of reasons, the immune system did not form a robust response to this lowest-common-denominator approach.

Hensley’s vaccine, on the other hand, consists of proteins from all 20 different types of the flu — or technically, the recipe for the recipient to make those proteins, spelled out with the four building blocks of mRNA.

That concept was first developed two decades ago by two of Hensley’s Penn colleagues, Drew Weissman and Katalin Karikó, who gained wide acclaim upon its first real-world success, the Pfizer and Moderna vaccines against COVID. Weissman also is among Hensley’s collaborators on the universal flu vaccine, and separately, he is working on various vaccines that would protect against multiple coronaviruses.

Scientists not involved with the flu vaccine experiments, the results of which were published in Science, say the Penn team’s approach seems promising.

In addition to allowing for the inclusion of 20 different kinds of proteins, mRNA vaccines can be made more quickly than traditional vaccines. That’s a plus if recipes need to be tweaked in a pandemic, University of Saskatchewan scientists Alyson A. Kelvin and Darryl Falzarano wrote in a commentary published in the same journal.