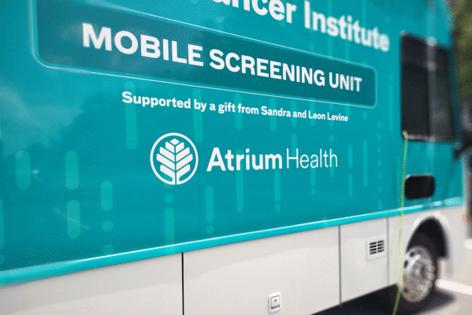 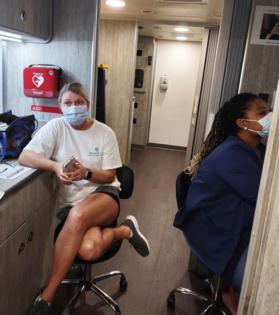 During a routine visit to the Good Samaritan Clinic in Morganton, North Carolina, in 2018, Herbert Buff casually mentioned that he sometimes had trouble breathing.

He was 55 years old and a decadeslong smoker. So the doctor recommended that Buff schedule time on a 35-foot-long bus operated by the Levine Cancer Institute that would roll through town later that week offering free lung cancer screenings.

Buff found the “lung bus” concept odd, but he’s glad he hopped on.

“I learned that you can have lung cancer and not even know it,” said Buff, who was diagnosed at stage 1 by doctors in the rolling clinic. “The early screening might have saved my life. It might’ve given me quite a few more years.”

The lung bus is a big draw in this rural area of western North Carolina because some people aren’t comfortable going — and in many cases have no access — to a hospital or doctor’s office, said Darcy Doege, coordinator for the screening program.

“Our team makes people feel welcome,” she said. “We can see up to 30 patients a day who get referred by their primary care doctor or their pulmonologist, but we also accommodate walk-ups.”

Lung cancer is the deadliest of all cancers. It grows quietly and is usually not detected until it has spread to other parts of the body. Early detection is key to survival, especially for someone at high risk like Buff, who is African American and has a history of smoking.

Although it is well documented that Black smokers develop lung cancer at younger ages than white smokers even when they smoke fewer cigarettes, the guidelines that doctors use to recommend patients for screening have been slow to reflect the disparity. If Buff had the same conversation with his doctor one year earlier, he would not have qualified for the CT scan that detected a nickel-sized growth on his left lung.

But screening is only part of the issue, said experts who evaluate what happens both before and after a person is checked for signs of cancer.

Researchers are concerned about the lack of diverse representation in the clinical studies on which the screening recommendations are based. For example, about 13% of the U.S population is Black, but Black people made up just 4.4% of participants in the National Lung Screening Trial, a large, multiyear study in the early 2000s that looked at whether screening with low-dose CT scans could reduce mortality from lung cancer.