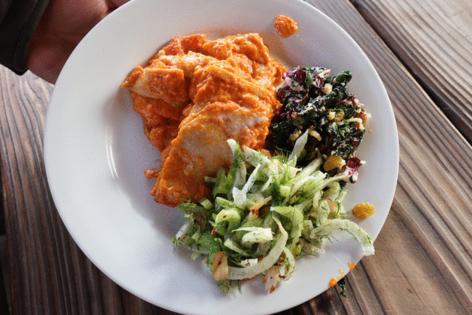 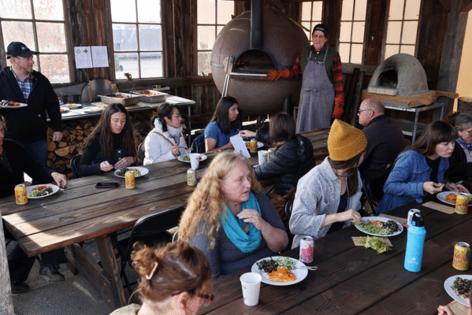 Throughout history, people have cooked food, found warmth and gathered with others around kindling — a sign that it's safe enough to rest.

The flames burning in a wood-fired oven on an October Thursday served as that gathering place — a spot to cultivate community at a program for farmers and farmworkers. Don McMoran, the director of the Washington State University extension office in Skagit County, had invited people who work in agriculture, also known as producers, to learn to make wood-fired meals from scratch, like a pizza using whole grain wheat, locally grown tomatoes and cheese from nearby dairy farms.

On the surface, the demonstration — pushing and pulling the dough into a perfect circle, crisping the toppings in a kiln until the pizza turns golden brown — was an effort to show that making delicious food only takes a few ingredients. But the primary purpose of this "Pizza for Producers" event lay in between the making and baking: Farmers and farmworkers, many of whom labor in solitude, came together, ate and opened up about their work and themselves.

It wasn't advertised as such, but the event was intended as a mental wellness workshop for people working in agriculture, an industry that faces particular mental health challenges. Climate change threatens farmers' and farmworkers' livelihoods. Rising inflation creates extreme financial worries. They often work in rural areas, where help is hard to find but guns are easy to access. And cultural attitudes discourage seeking help.

That means many agricultural workers experience depression in isolation.

McMoran knows this personally. He grew up as the fourth-generation farmer on a 2,000-acre potato farm in Skagit. As a child, he experienced the suicide of a man who worked on his family's farm. Between 2016 and 2019, he experienced three more.

After that, he said, he slammed his fists on his kitchen table and said, "That's it. I'm not going to have this in my county anymore. I need to get off the sidelines and do something."

Funding from the state Department of Health enabled him to start a suicide prevention pilot program in Skagit, and a grant from the United States Department of Agriculture allowed him to expand outreach throughout the West. It's with that money that he's starting the Pizza for Producers.

Farm-related stress is an increasing concern among producers and researchers. A survey of nearly 800 agricultural producers in 13 Western states found that 78% of respondents are experiencing stress that is impacting their sleep, physical and mental health and relationships. Another 4.4% reported even higher levels of stress, like those associated with depression and anxiety. Workload, lack of time for production, and financial worries topped the list of stressors, according to 2021 Western Regional Agricultural Stress Assistance Program data.

A painful, parasitic disease that once infected 3.5 million people per year is tantalizingly close to being eradicated.