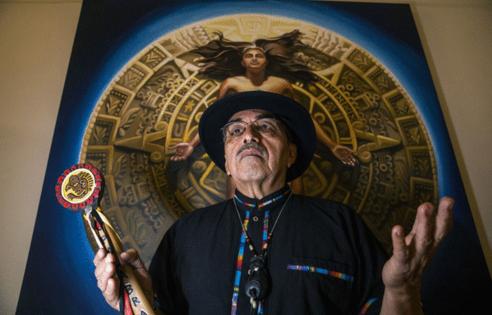 LOS ANGELES -- The home of the Sacred Circles Center in Whittier, California, is inside a small white structure with blue trim. The building doesn't have a sign in front, but co-founder Jerry Tello says "the people that need to be here, will be here."

The center was created to be a place for people to come together and heal through presentations by Indigenous elders, culturally based healing and meditation circles, life coaching and family counseling.

The intimate space hasn't been used since the onset of the pandemic, but that hasn't stopped Tello and co-founder Susanna Armijo from continuing their mission of helping their community virtually, leading sessions via Zoom.

It's a calling that runs in Tello's family, which has Mexican, Coahuiltecan and Texan roots.

Growing up in Compton, Tello, 70, said he remembers his mother and grandmother helping their neighbors and friends through sobadas (Indigenous-based massage) or traditional herbal remedies. He also remembers his mother telling him not to talk about her healing work with teachers because it wasn't viewed as part of Western medicine.

This act of wanting to help others but facing the constraints of what's acceptable in medical and mental health practices was a turning point in Tello's service work as an adult.

He went to Cal State Dominguez Hills, earned his bachelor's degree in psychology and worked in community mental health clinics, including now-shuttered El Centro Mental Health. Even though he was able to assist people, he felt that following assessment and diagnoses protocol wasn't enough to meet his community's needs.

Tello and fellow therapists and community health practitioners, including a psychiatrist, began meeting to explore traditional Indigenous methods of helping the Chicano and Latino community; the group called itself Calmecac.

"We began exploring that, within our own culture, we had volumes that were written about healing, constructs, methodologies, philosophies, remedies and traditions that we didn't know about that our grandmothers used but that were not validated," he said.

This research, his college background, his clinical work and his experience of the Chicano and civil rights movements in Los Angeles pushed him to "explore effective ways [for] really healing, not just treating, not just intervening, not just medicating and diagnosing but truly healing our people."