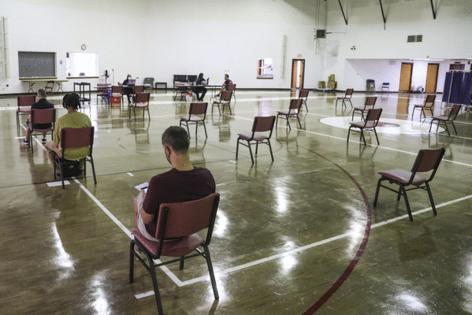 PHILADELPHIA -- The last weekend of August, party promoter Jeremy Taylor hosted a dance at a Broad Street club in Philadelphia featuring tracks from Beyonce’s latest album and cards telling guests where to get monkeypox vaccinations.

Protecting people from a new virus spreading rapidly over the summer was a priority for Taylor, who hosts events under the name JayLaTay. His dances draw many people who identify as Black and LGBTQ — a population in Philadelphia that’s more likely to contract monkeypox, and less likely to be vaccinated against it.

Warnings about the virus transmitting through sustained physical contact didn’t phase Taylor, who saw little risk that dancing at the venue beneath the Divine Lorraine would endanger guests.

The real risk comes from sex, according to increasing data on the outbreak that’s primarily spreading among men who have sex with men. It remains unclear if semen is specifically playing a role in transmission. The Centers for Disease Control’s online guidance continues to highlight physical contact as risky, or contact with objects that touched the skin lesions caused by monkeypox, Yet in an update to their online guidance posted Wednesday, the CDC stated transmission is “almost exclusively associated with sexual contact in the current outbreak.”

“We just haven’t seen a substantial number of people saying my only exposure is going to this shirtless sweaty dance party,” said Jeffrey Klausner, a doctor and expert in sexually transmitted diseases at the University of Southern California’s Keck School of Medicine.

Steven Thrasher, a professor of journalism at Northwestern University’s Institute for Sexual and Gender Minority Health and Wellbeing, wrote an article last month in Scientific American arguing that monkeypox should be called a sexually transmitted infection.

In an interview, he questioned whether the CDC has been doing more harm than good with its messaging, noting that while contracting monkeypox through different types of extended physical contact is possible, the federal health organization’s own data has found that 94% of cases were associated with sex or similarly intimate contact.

PHILADELPHIA — Jess Jones, a licensed clinical social worker, treats a number of patients with ketamine-assisted therapy — where clients take ketamine, prescribed by a psychiatrist, in a series of sessions to treat ...Read More

SAN JOSE, Calif. -- Could Paxlovid solve one of the pandemic’s biggest puzzles? A new study at Stanford University aims to find out.

In the nation’s first medical trial of an antiviral strategy to treat long COVID, ...Read More

For several months during the summer of 2022, my dog Scout vomited at 3 a.m. nearly every day. If you have a dog, you know the sound. And each time, she gobbled up her mess before I could get to it, making diagnosis of ...Read More

Among the more remarkable legacies of the COVID-19 pandemic is how quickly federal regulators, the health care industry and consumers moved to make at-home testing a reliable tool for managing a public health crisis.

What we eat as well as how much we eat are determined by a multitude of factors that go well beyond physical sustenance, such as culture, religion, income level, family, cooking skills and accessibility, to name a few. ...Read More

Food-related germs cause an unbelievable 48 million cases of illness (aka food poisoning) each year in the U.S., including 128,000 hospitalizations and 3,000 deaths. The good news is, it’s largely preventable. If you do ...Read More