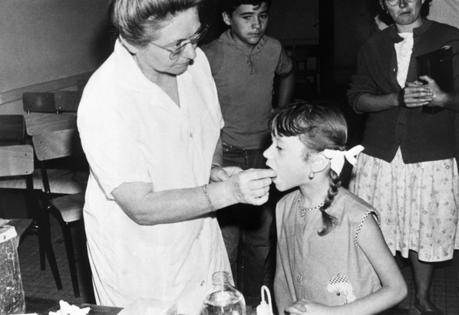 Vaccines helped neutralize the global threat of polio, a dreaded scourge that can cause paralysis and death, but that life-saving drug may have led unintentionally to the virus’ reappearance this year in the U.S. and other countries.

A form of the vaccine taken by mouth that uses a weakened live version of the poliovirus is believed to have spawned the virus that health officials say is spreading in two suburban New York counties and infected and partly paralyzed an unvaccinated young adult there.

“Even a single case of paralytic polio represents a public health emergency in the United States,” the Centers for Disease Control and Prevention said in a new report on the case Tuesday, noting that it is only the second U.S. case of community transmission of the virus since 1979. “This case highlights the risk for paralytic disease among unvaccinated persons.”

Fortunately, those who have been vaccinated against polio — it’s among 10 immunizations required for admission to California K-12 schools — should not be concerned, medical experts say. The live version of the virus used in vaccines now in question is no longer used in the United States.

“If you’ve been vaccinated, you’ll be protected. You have nothing to worry about,” said Dr. Lee Riley, who chairs infectious diseases and vaccinology department at the University of California, Berkeley. “It’s those people who’ve not been vaccinated who need to be concerned.”

The polio virus enters the body through the mouth and lives in the throat and intestines. It is spread through person-to-person contact by coughing or sneezing or through contact with infected feces. Most people who become infected experience no symptoms. About one in four develop influenza-like symptoms that go away after two to five days.

Two similar cases have been identified in the United Kingdom and Israel. As of Aug. 10, the CDC report said, no other cases of polio have been detected in the U.S.

But the CDC said detection of polio virus in the wastewater of New York’s Rockland and Orange counties “indicates community transmission and ongoing risk for paralysis to unvaccinated persons.”

How the New York patient got infected and the virus got into the wastewater system isn’t known, the CDC said. But because he hadn’t traveled overseas, it “indicated a chain of transmission within the United States originating with a person who received a … oral polio vaccine abroad.”

The U.S. stopped administering oral live attenuated polio vaccines for routine vaccination in 2000 and they were largely discontinued globally in 2016, the CDC said. Since then the U.S. has used only polio vaccine containing inactivated virus that cannot replicate, strengthen or cause disease.