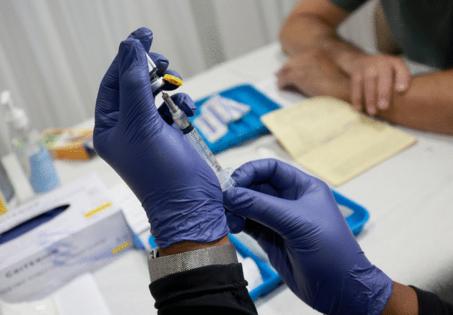 Health officials are scrambling to stretch scarce doses of vaccine to slow the mounting monkeypox outbreak, but do older people already vaccinated as kids for the related but deadlier smallpox virus already have protection?

The Centers for Disease Control and Prevention isn’t betting on it. The U.S. health agency says those exposed to the monkeypox virus “who have not received the smallpox vaccine within the last 3 years should consider getting vaccinated.” And on Monday, the CDC endorsed a strategy of giving the smallpox vaccine under the skin — at a fifth of the usual dose.

“I wouldn’t say there’s no protection,” said Andrew Noymer, an associate professor of population health and disease prevention at the University of California, Irvine. “But it’s not something I would just count on.”

Smallpox, a highly contagious ancient scourge that killed three out of 10 people it infected and left survivors pocked with scars, was eradicated worldwide in 1980 thanks to a global vaccination effort. The disease had been eliminated in North America and Europe since the early 1950s, and routine U.S. vaccinations ended in 1972.

The vaccine is based on a cousin of both smallpox and monkeypox and offers protection against both. Though monkeypox is not nearly as deadly as smallpox, it can still cause painful rashes and symptoms and potentially permanent scarring.

The U.S. now leads all countries in the current global monkeypox outbreak, which has infected nearly 32,000 worldwide and nearly 12,000 in the U.S., including almost 2,000 in California and nearly 2,300 in New York.

Noymer said the study shows the waning ability of vaccination to ward off disease decades later. He noted that before smallpox was eradicated the CDC had recommended revaccination at five-year intervals.

The oft-cited assessment that smallpox vaccines are 85% effective against monkeypox infection was based on a 1988 study in Zaire, where smallpox vaccination ended in 1980. Noymer said that although the study was sound, it was not a clinical randomized controlled trial.

FORT WORTH, Texas — The National Institutes of Health is giving $149 million to researchers at the University of North Texas Health Science Center to pay for researchers to study the biology of Alzheimer’s disease in ...Read More

Brushing your teeth is essential for maintaining optimal oral health, but like most aspects of health, the full story is more complicated.

As directors of the Center for Oral Health Research in Appalachia, we ...Read More

Q: Our daughter is crawling and exploring, and we are hurrying to childproof our house. What are some areas that we might overlook?

A: As you go through and childproof your home, you'll likely pay special attention to ...Read More

He walks his followers through a back-to-school shopping trip and wonders if they should buy "anime backpacks." He does a finger...Read More