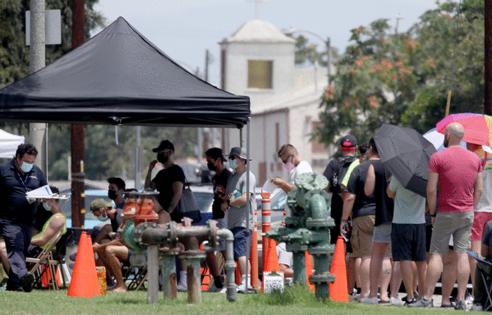 The virus is estimated to have killed more than 300 million people in the 20th century. But by 1980, thanks to a successful vaccination campaign, it was eradicated. No one today receives routine childhood vaccinations for smallpox, because you can't catch it anymore.

But the disease is back in the public consciousness because of monkeypox. In fact, monkeypox was discovered during the global smallpox vaccination campaign. And the global eradication of smallpox may have created an opening for monkeypox, said Peter Hotez, co-director of the Center for Vaccine Development at Texas Children's Hospital and dean of the National School of Tropical Medicine at Baylor College of Medicine

"Monkeypox is believed to have become more prevalent after we stopped vaccinating populations against smallpox," he said. "We pretty much slowed or halted smallpox vaccine programs" — the last routine shots were given in the 1970s in the U.S. — "and that was actually enabling for monkeypox to emerge among human populations, because immunity was wearing off."

The first human case of monkeypox was recorded in 1970.

Both smallpox and monkeypox are caused by orthopoxviruses. The symptoms are similar, though monkeypox is rarely fatal. The diseases are so similar, in fact, that the same vaccine is used for both: Jynneos. So the monkeypox vaccine is the smallpox vaccine; they are not different shots.

What if you were vaccinated against smallpox pre-1980? Georges Benjamin, executive director of the American Public Health Association, said you would likely have some degree of protection from monkeypox, but you should still get the Jynneos vaccine if you're exposed or are otherwise eligible.

"Unless you were recently vaccinated for smallpox, like the last two to three years, most likely you probably want to go ahead and get vaccinated if you're exposed," he said.

With monkeypox cases rising in the United States, are we all going to need to get vaccinated for smallpox? Right now, it doesn't seem like that will be necessary.

It's alarming to see another infectious disease gain a foothold while we're still attempting to fend off COVID-19. But COVID and monkeypox are very different, said Anne Rimoin, a professor of epidemiology at the UCLA Fielding School of Public Health and a member of the World Health Organization's emergency committee on monkeypox.