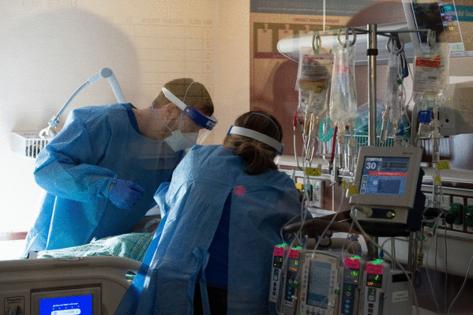 DENVER -- A study in Denver is trying to determine whether a history of concussions increases a person’s odds of developing cognitive or psychological symptoms of long COVID, and, if so, whether that points to new ways to treat the post-viral condition.

Daniel Linseman, a professor at the University of Denver who studies diseases and injuries that cause degeneration in the brain, said the theory is that a brain that’s already been stressed by concussions will be more vulnerable to long COVID symptoms.

But the group of researchers, which includes doctors from National Jewish Health and the Englewood clinic Resilience Code, will need to enroll enough people with and without a history of concussions to determine if that’s correct.

Some markers in patients’ blood during a COVID-19 infection are similar to those in patients who’ve had a concussion, Linseman said. That suggests that while a viral infection and a hit on the head may feel different to patients, they could share some underlying biology. If the researchers can determine what’s happening, that information could guide efforts to find treatments, by pointing to drugs to address the source of inflammation, he said.

Long COVID is an umbrella term for dozens of lingering symptoms people report after a bout with the virus, such as shortness of breath, loss of smell and a racing heart rate. This study focuses on neurological symptoms, such as “brain fog” and new mental health problems. Many people experience improvement over time, but some have been forced out of work by their symptoms.

A recent survey of adults from the Centers for Disease Control and Prevention found that about 35% of those who said they had had COVID-19 reported symptoms that lasted three months or longer, though it noted that could be an overestimate, since some people don’t know they had the virus.

Studies around the country are trying to define long COVID, figure out what causes it and come up with ways to treat it. The biggest effort is the RECOVER study, which is run by the National Institutes of Health and is enrolling patients through Denver Health and the University of Colorado Anschutz campus. RECOVER has had a slow start, however, and has struggled to sign up pediatric patients, as well as adults with a new COVID-19 diagnosis. Enrolling patients before they know if they will develop long COVID may allow researchers to figure out what goes awry and produces lasting symptoms.

Concussions can leave a lasting mark on the brain in multiple ways, Linseman said. When cells are damaged, their mitochondria — the parts of the cell that generate energy — become less efficient and produce more electrically charged waste products, known as free radicals. Those can damage other cells.

“It becomes kind of a vicious cycle in the brain,” he said.

The brain can also go into a state of inflammation, which is helpful in the short term for healing damage, but makes the situation worse if it doesn’t quiet down. The blood-brain barrier, which limits how easily infections and pollution get into the brain, also can weaken with repeated concussions. Patients in the throes of a COVID-19 infection show signs of inflammation, excess free radicals and weakening of the blood-brain barrier, though it’s not clear if those problems persist and cause longer-term symptoms, Linseman said.

There’s some precedent for people who have both an infection and a concussion history having worse outcomes than those with just one of those problems. Patients who’ve had multiple concussions are more likely to report neurological symptoms after a Lyme disease infection, Linseman said. (Lyme disease can be cured with antibiotics in its early stages, but some patients aren’t diagnosed promptly.)

“It’s not in the greatest shape to take any additional insult,” he said of the brain following concussions. “It’s teetering on the edge of chronic inflammation.”