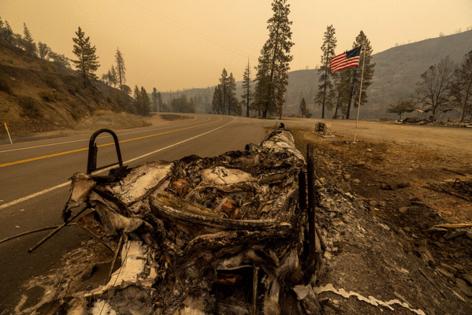 The organization estimated that more than 17,000 people in California will be diagnosed with lung cancer in 2022 and more than 9,600 will die from the disease.

It added that most people are not concerned about getting lung cancer. According to a survey, only 40% of Americans are worried that they may get the disease.

Generally, lung cancer can be caused by smoking tobacco, genetics, second hand smoke, radon and asbestos exposure and air pollution, according to the American Cancer Society.

It’s not clear yet if wildfires are directly related to California’s lung cancer rate, said Rizzo, who is also a pulmonary physician in Delaware.

But certainly, wildfire smoke is known to contribute to poor air quality and air pollution with particle matter, Rizzo said.

Wildfires increases the amount of PM 2.5 — fine inhalable particles — in the lungs, he said, and is known for causing lung cancer, asthma, chronic obstructive pulmonary disease and increasing the risk of problems for people with chronic lung disease.

A recent study from McGill University in Canada found that people who’ve been exposed to wildfires have a higher chance of lung cancer and brain tumors.

In 2019, Columbus, Ohio, had seven reported cases of congenital syphilis, or cases in which a newborn child was infected during pregnancy. Two years later, that number rose to 20. And now?