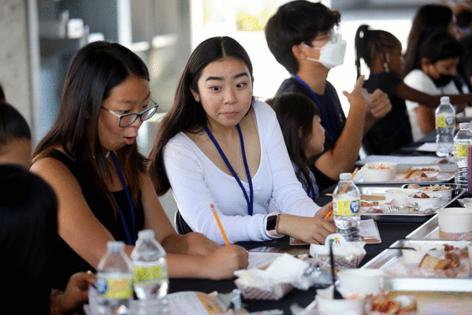 LOS ANGELES — Los Angeles school chefs — largely responsible for providing the main source of daily nutrition for tens of thousands of children — served up new back-to-school options Friday, the latest attempt to provide healthful yet appealing food to youthful taste buds. But in a world of Flamin' Hot Cheetos, will students eat their school meals?

"It is good," wrote diminutive third-grader Antonio Plascencia on his grading form, which he intended as high praise. He polished off his croissant sandwich before even moving to the next item on his tray.

Feeding L.A.'s children has long been an imperative in the nation's second-largest school district. About 80% of students are from low-income families and many grapple with food insecurity. Parents' long work schedules can be an additional challenge for preparing meals, let alone healthful ones. Every school day, the $180-million-a-year L.A. Unified program serves more than 300,000 breakfasts, about 285,000 lunches and about 70,000 early dinners.

During 13 months of pandemic-forced school closures, L.A. Unified filled the hunger void by offering grab-and-go food for any takers, surpassing the generosity and costs borne by many other school systems during the crisis.

"A disproportionate number of our kids live in poverty," Supt. Alberto Carvalho said Friday. "We offer breakfast and lunch for free — no questions asked — for every single kid in our school system. We're addressing the food insecurity in our community by providing nutritious healthy food options. They're also appealing. Why is this important? Hungry kids don't learn well."

He added his own reviews: "The new cinnamon rolls — very tasty. The kung pao chicken, honey glazed with brown rice and broccoli — delicious."

The items were prepared in the kitchen at the downtown Cortines School of Visual and Performing Arts for about 30 generally satisfied student tasters. But it is a long way from this setting to the mass-producing central kitchens, from which items are trucked to campuses.

The central-kitchen system has been an impediment to taste, despite quality ingredients and menus that meet or surpass federal guidelines. That's because many hot food items are, in effect, akin to reheated leftovers by the time they are served to students.

In the overcrowded L.A. Unified of the 1990s, efficiency was the priority in meal preparation, with central kitchens taking over for food prepared at school cafeterias — and prepackaged food stations installed to keep long lines moving. Many of the more than 100 new campuses lacked functional kitchens. And remodels of existing schools often removed cooking equipment.

DEAR MAYO CLINIC: About six months ago, a large, white dent appeared on my left buttock. I went to a dermatologist who performed a biopsy. I was diagnosed with morphea and prescribed methotrexate. The doctor said the ...Read More

DEAR MAYO CLINIC: As a woman in my 40s, I've experienced a wide variety of diet fads come and go. One week I read it's bad to eat carbs. The next week, it's full-fat dairy products. I've seen articles that say I should ...Read More

As hurricane season ramps up, emergency management officials recommend that residents in coastal communities plan for an active few months. Having the right supplies, creating a meal plan and knowing when food is no longer...Read More