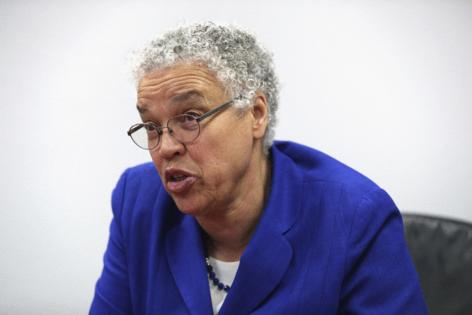 Starting this fall, hundreds of residents across Cook County will receive a note in the mail bearing a simple message: Your medical debt is taken care of.

Debtors will not need to apply to get the relief, nor will that debt forgiveness count against them when they file their taxes.

Picking up the tab: Cook County government, which will pay the nonprofit group RIP Medical Debt $12 million over the next three years to buy medical debt accumulated at hospitals across Cook County for pennies on the dollar.

Rather than attempt to collect on that debt, the group will forgive it and work to have that debt erased from credit reports. Because medical debt can often be purchased for pennies on the dollar compared to the original charge, the county hopes to abolish $1 billion in medical debts that could date back years.

The money comes from the county’s pool of $1 billion in American Rescue Plan Act funds. The program must still be approved by the Cook County Board, and local hospitals must consent to participate, but county board president Toni Preckwinkle and partners in the project expect both to happen.

So does the White House: Preckwinkle will be recognized alongside other government officials at a Thursday event with Gene Sperling, President Biden’s ARP coordinator and senior adviser, for their creative use of ARP dollars.

Alongside the county’s $42 million guaranteed income program and plans to fund new behavioral health offerings at county-run hospitals and clinics, Preckwinkle told the Tribune she hopes the medical debt abolition program will help improve families’ long-term economic security and encourage people to seek out medical care free from worries about being pursued for past-due bills.

Eligible individuals will be Cook County residents who received healthcare on or after Mar. 30, 2020, have a household income less than four times the federal poverty level, or have medical debts that are 5% or more of their annual income. Debt accounts will be anywhere from 18 months to 7 or more years old. Account balances will have been written off to bad debt, and hospitals consider the accounts to be dormant. RIP plans to buy that debt directly from hospitals in bundles.

Creditors like hospitals, ambulance operators or private doctors write off debts after a few years and put them up for sale to third-party collection agencies, who can buy millions of dollars worth of charges at a fraction of the original cost in the hopes of collecting on at least some past-due bills. The older the debt, the cheaper it is to buy. Rather than collect on those debts, RIP Medical Debt uses donations to forgive them.

Medical debt is a stubborn issue nationally: It’s the leading contributor to personal bankruptcies. Somewhere between 17 and 35% of American adults have medical debt, according to the Consumer Financial Protection Bureau, and Black and Hispanic people, young adults and low-income individuals have higher rates than the national average.

Doctors should be on the lookout for cases of a respiratory virus that can sometimes cause polio-like muscle weakness and paralysis in children, U.S. health officials said.

As mandatory evacuations for Hurricane Ian began in Florida and the warnings about damaging wind and flooding intensified, I called my aging parents to check in.

Being a disaster researcher, my concern for them ...Read More

The past decade has witnessed a rapid expansion of genetic tests, including new instruments to inform patients who have been diagnosed with breast cancer about the risk of recurrence and to guide their treatment.

Stress and upheaval are harmful at any time, but the pandemic has forced many families onto a roller coaster ride that seems unending. Families and caregivers are concerned about what this period of great instability means...Read More

For many women, especially those who have had children, leakage of urine is a common complaint. So, too, is an urgency to use the bathroom.

These conditions are among the most common pelvic floor issues affecting women, ...Read More

A healthy lifestyle and reducing the risk of childhood obesity involves getting enough exercise, limiting processed and sugary treats, as well as getting the right amount of sleep. Dr. Tina Ardon, a Mayo Clinic family ...Read More