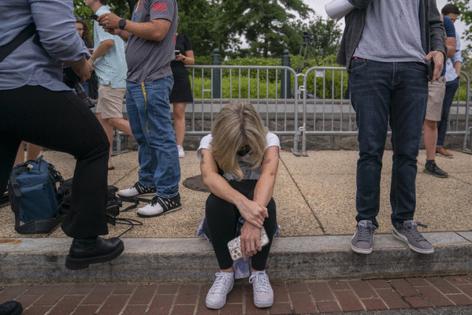 The majority of Americans support legal abortions at least most of the time, repeated polls have shown, with 61% saying that abortion should be legal in most or all cases, according to a recent survey by the Pew Research Center.

Since Friday, eight states have banned abortion and about a dozen more are considering following suit.

Many anxiety-inducing questions remain, including not only how accessible abortion will remain outside of blue states but also what civil rights precedent the Supreme Court could strike down next.

The Times spoke to three people who specialize in mental health care and its relation to abortion about ways to process the news of the Supreme Court’s decision in Dobbs v. Jackson Women’s Health Organization and what the mental health impacts may be. Their written responses are organized below, edited for brevity.

--Claudia Parada, an associate marriage and family therapist who specializes in treating multiple components of people’s identities, including race, sexuality and decisions around parenting.

Q: What should people understand about the mental health fallout after the overturn of Roe v. Wade?

Dyer: “We know from scientific research that facing barriers when seeking abortions, like needing to travel to another state, delaying care to save up for the abortion itself (as well as child care, a hotel, food, gas, taking time off work), is associated with greater emotional distress. With the overturn of Roe v. Wade, we can expect this sort of emotional distress to impact more people more significantly, as states now have the power to pass laws making abortions illegal.