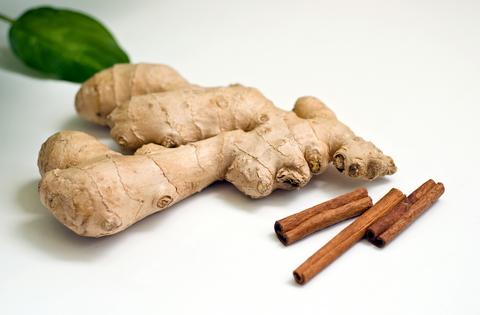 When you’re feeling a chill, what better way to add warmth than by spicing up your favorite comfort foods. Apple pie wouldn’t be the same without cinnamon; spicy ginger punches up soups; zippy black pepper jazzes up roasts; and aromatic vanilla adds extra oomph to baked goods. Spices do more than just add flavor, they also serve up unique health benefits.

If you’ve hit the trails or gym a little too hard recently, a sprinkle of cinnamon may help you recover faster. Women who ate about 1 1/2 teaspoons of cinnamon (or ground ginger) every day for six weeks experienced a decrease in muscle soreness brought on by exercise, found research published in the International Journal of Preventive Medicine.

Although you probably know ginger best as a stomach soother, it may also help you feel fuller and even burn more calories. When overweight men ate breakfast with ginger “tea” (powdered ginger dissolved in hot water), they felt more satisfied and ate less throughout the day than men who were given the same breakfast with just hot water, says research in the journal Metabolism. Plus, the men who drank ginger tea burned about 40 calories more just digesting their meal.

There’s plenty to love about the flavor that vanilla adds to baked goods. Sniffing that delicious aroma can also help put the brakes on your sweet tooth. Overweight individuals who wore a vanilla-scented patch on the back of their hands for four weeks cut their intake of sweet foods (like sugary drinks and high-calorie desserts) in half, while people in the study who wore a lemon-scented patch or no patch showed no change in eating habits.

“Vanilla helps offset the pleasure derived from sweet foods,” says Catherine Collins, RD, lead study author and ICU dietitian with Surrey and Sussex Healthcare NHS Trust in the United Kingdom. To get a similar effect and to help you avoid overindulging in holiday sweets, light a vanilla-scented candle in your kitchen or wear a vanilla-infused body spray or perfume.

The most popular spice in the United States may also be an ally in your battle against holiday weight gain. A substance in black pepper called piperine may help block the formation of new fat cells, according to a recent study on mice from the Journal of Agricultural and Food Chemistry.

(EatingWell is a magazine and website devoted to healthy eating as a way of life. Online at www.eatingwell.com.)