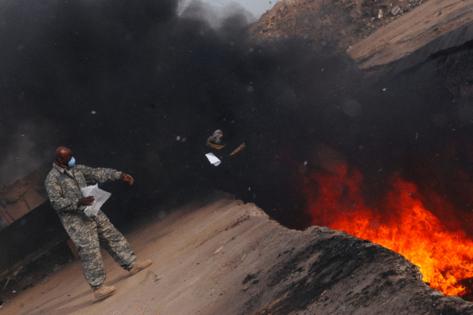 WASHINGTON — A bipartisan bill to expand veterans health care and disability benefits will not make it to President Joe Biden’s desk until after the July Fourth congressional recess because of a minor tax provision.

The House is supposed to originate tax bills under the Constitution. So when the Senate passed the bill last week with the tax provision in it, the move created a blue slip problem requiring the bill to be reconsidered.

Senate Veterans’ Affairs Chairman Jon Tester, one of the bill’s chief sponsors, made a rescue attempt Thursday night as the Senate was preparing to adjourn for the two-week recess. He asked unanimous consent for the Senate to request the return of the papers from the House, and notwithstanding the lack of receipt of the papers that the Senate immediately agree to a resolution dropping the problematic tax provision from the bill.

But without agreement from all 100 senators, there was no chance of fixing the bill before the recess. And Sen. Patrick J. Toomey, R-Pa., promptly lodged an objection.

The Senate first passed the bill last week in an 84-14 vote. The measure would make it easier for veterans exposed to burn pits or other toxic substances to access benefits by presuming that certain types of cancer and respiratory illnesses are connected to service-related exposure. The Congressional Budget Office estimates that the bill would cost $278.5 billion over a decade.

The bill also includes provisions designed to improve care at Veterans Affairs facilities, like one that would give the VA secretary authority to buy out private service contracts of health care professionals if the individual agrees to work at a rural VA facility for at least four years.

The provision that triggered the blue slip issue would have exempted health care professionals receiving those contract buyouts from having to pay taxes on those funds.

The tax provision is “de minimis at best,” Tester told reporters Thursday. “Somebody should have caught it long before we got to this point.”

A Senate source said the House had the text since May but didn’t notify the Senate of the blue slip issue until Tuesday. The House had passed an earlier, slightly more expansive version in March.