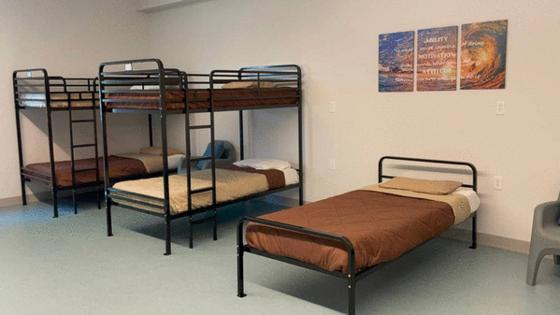 SACRAMENTO, Calif. -- Sacramento’s four hospital systems teamed up with WellSpace Health to tackle a longstanding challenge for the region’s homeless residents: Where can they go to get the conditions needed to recuperate after a hospital visit?

As of this year, the answer is a spacious, well-lit center at 4990 Stockton Blvd. in Sacramento. Roughly five years in the making, this new recuperative care facility cost $9 million to acquire, renovate and furnish. The funds for the project came from Dignity Health, Kaiser Permanente, Sutter Health, UC Davis Health, government sources and loans that WellSpace took out.

“Homelessness is what they call a wicked problem, a multifaceted problem that is very difficult to solve, and I don’t think there will be solutions unless we all come together with our collective resources and with the community and work together to try to solve it,” said Dr. Susan Murin, the interim dean for the School of Medicine at the University of California, Davis.

A large graphic image of him greeting patients upon arrival in the lobby captures snippets from his favorite phrases. A few include “believe in miracles,” “form the seeds of community” and “calls us to love and action.”

Speaking at last Wednesday’s ribbon-cutting ceremony, Bunker’s son Jesse said: “I can’t think of a greater way to honor my father’s memory than this place devoted to overcoming adversity and hardship and hopefully giving people the opportunity to be great.”

Wellspace has already begun taking patients for its 100 or so bed at the site. WellSpace has acquired a variety of bed types to meet patient needs, and there are closets where they can lock away personal possessions.

The facility has a number of amenities for patients. They can access the internet on desktop computers in the “empowerment room.” There’s a snack room where patients have access to items like soup, coffee, yogurt or fruit 24 hours a day. They also can gather in one of seven day rooms to watch TV, play board games or read books.

Hospitals arrange rides to “the Bunker” for patients, or WellSpace case managers go to pick them up, said Jonathan Porteus, chief executive officer of WellSpace, which served roughly 125,000 Medi-Cal enrollees and uninsured residents in the Sacramento region last year.

Often, he said, that ride in the car is a way for the case managers to create a connection with a patient that they can’t get when they’re typing in information on a computer in an office.

An alternative to shelters

Until now, the hospital systems had worked with local shelters to get beds for those whose injuries could have worsened if they went immediately back to the streets, Porteus said, and WellSpace rented space from the shelters to station its staff members there to provide care.

Computer technician Joe Clymer of Sacramento said he went through a rough patch two years ago and needed shelter and health services after a hospital stay. The services they had at the shelter were very limited when compared to what unhoused residents will receive at the new Gregory Bunker Care Transitions Center for Excellence, Clymer recalled.

“I’m amazed,” Clymer said after a tour of the Bunker. “There is so much more open space. There are day rooms, there was the computer lab, which is near and dear to my heart. I’m a technician. I’ve done volunteer work at places for people coming out of prison who need help filling out job applications. ... They did a great job where they were, but now they can improve on that.”

Under the previous arrangement, 50-60 beds were available, Porteus said, but this new facility allows room to grow that number and to expand to accommodate other types of patients. WellSpace and the hospital systems are now looking at providing recuperative care to patients who were seen in emergency rooms but were not sick enough for hospital admission.

“We’re designing a 25-bed program as a pilot,” he said. “Essentially, if someone shows up to the emergency department and they don’t actually need to be in the hospital, but the providers and the emergency department may have concern (about releasing them to the streets), they can say, ‘I’d like you to go for three to five days to this safe, clean place and start on this medication’ or ‘I think you’re really worn out and you need three days of recuperation in a safe, clean environment. They will prescribe that, and then we will receive someone for that time.”

Generally, homeless residents have higher rates of illness and, on average, they die 12 years younger than other U.S. citizens, and in many cases, the cause of homelessness is injuries and illnesses that people have sustained, according to the National Health Care for the Homeless Council.

WellSpace has a team of case managers who work closely with patients to ensure they get benefits they qualify for and to find them housing for when they leave. Patients can stay up to 90 days if medically necessary, but many simply need time to get through a course of antibiotics or let a wound heal.